LET YOU CREATE YOUR NEW ALHAMBRA! Build as many different buildings as possible in your Alhambra with the help of dice and player blocks! Use your yellow and blue dice cleverly so that you score more victory points than your competitors. Unsteady dice frustrate your plans again and again. But for resourceful builders, there is no die score that cannot be impacted by a few coins…

QUEEN GAMES has submitted ALHAMBRA ROLL & WRITE for review.
This does not affect our rating!

In the dice version of ALHAMBRA, every 1-5 people receive a player block. For all to see, a sheet of the scoring block is placed on the table in which the names of the players and the buildings they build during the game are entered. 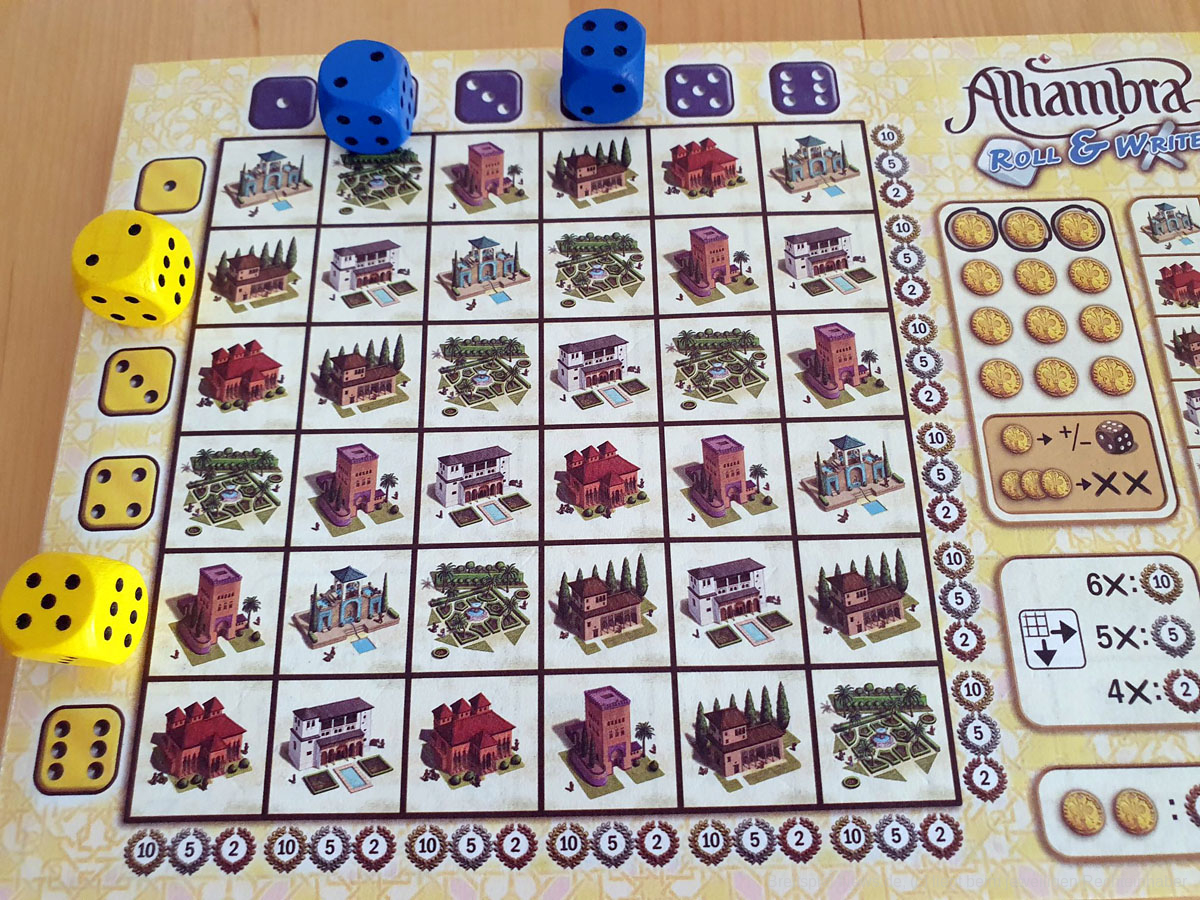 The point block also has a lap counter with a different number of turns for 1 person, 2, 3 people, 4 people and 5 people.

Yellow and blue dice are dealt to all ends of the game. Before the actual start of the game, three starting blocks are rolled on their player block: all players roll the dice at the same time and the score, which results from the dice intersection points, is entered on the player block. This happens three times. The corresponding buildings are also entered in the point block.

The person who starts is determined freely and also receives one yellow and one blue die. Everyone starts the game with three coins each, which are already marked on the game board. 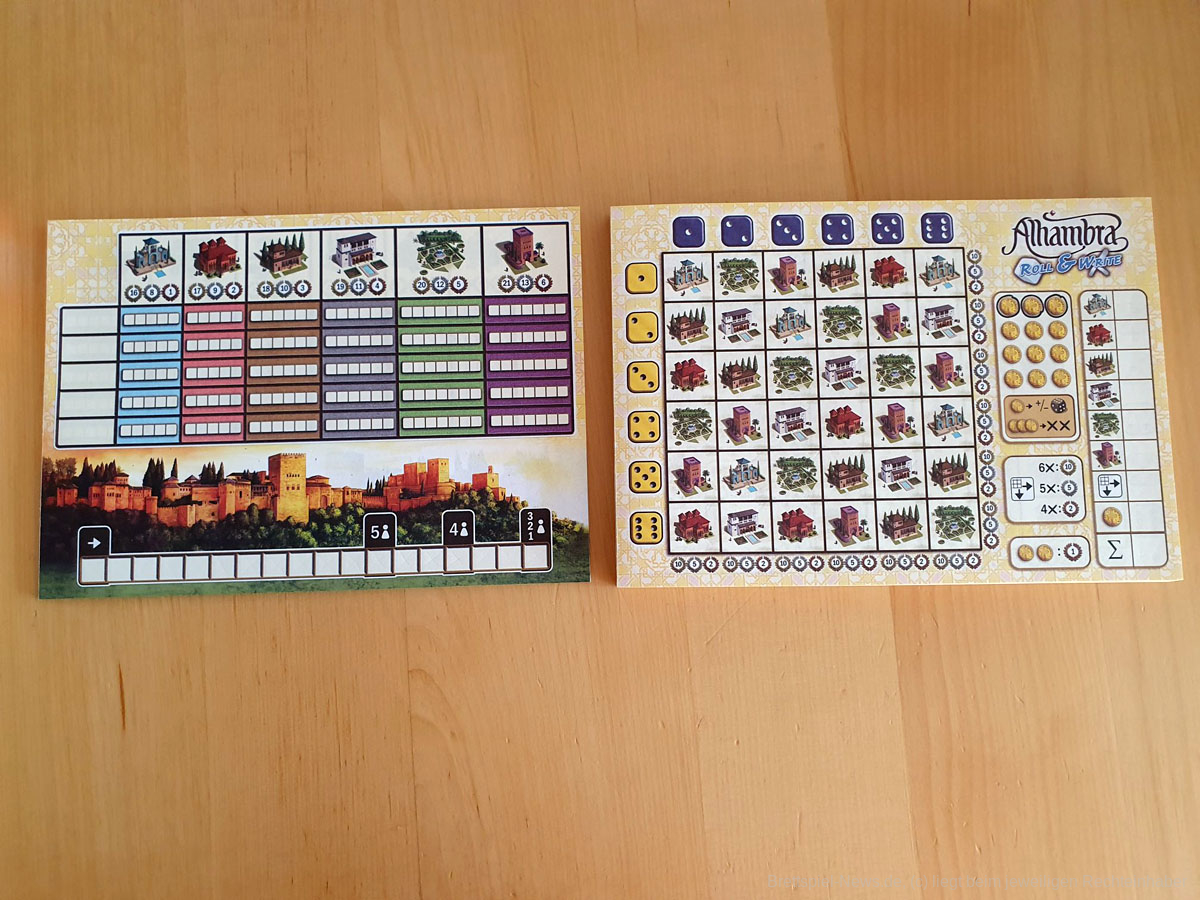 Everyone rolls their dice at the same time (the one who starts with four dice, and everyone else with two dice) and puts the dice according to their number and color on their player block. For example, blue 2, blue 6, yellow 1, and yellow 4. Produces a building that can be marked from the intersection points of a blue and yellow cube.

If the end of the game chooses, for example, blue 2 and yellow 4, the tower is marked with a cross, both on the player’s block and on the point block behind the corresponding name.

A building that has been flagged once cannot be flagged again. If none of the 4 crossing points can be used by throwing the dice, the action “Receive Coins” must be chosen.

Then the used dice are removed from the player’s block. Blue 6 and yellow 1 are scrolled clockwise by these numbers. In the next player’s turn, you can place the blue 6 and the yellow 1 next to your dice that are already on the player’s block, so that four points of intersection can now be identified. The dice of the same number are placed on top of each other.

Buildings are selected again and entered on the player board and on the scoreboard. 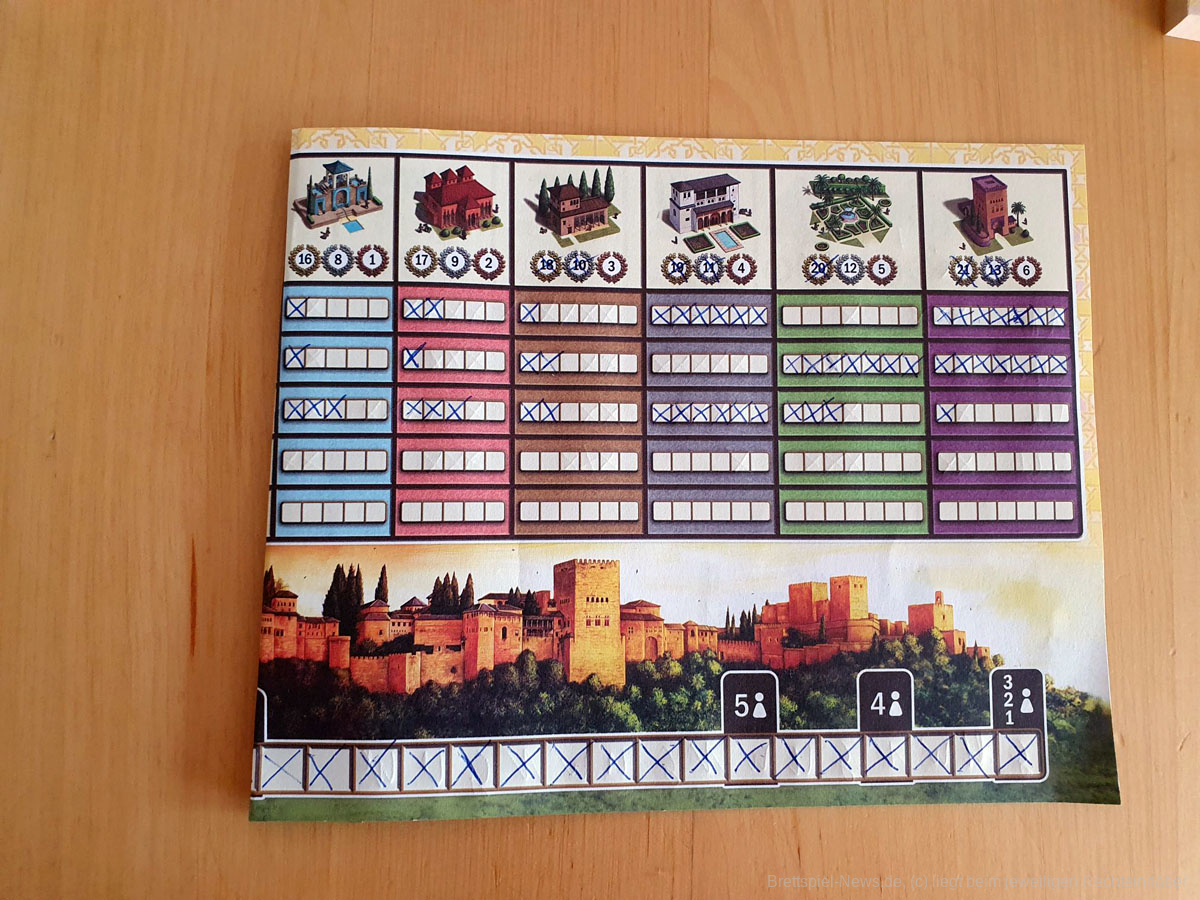 It is also possible to forgo putting a ticking on a building and get coins instead. As usual, all four dice are rolled and placed on the player’s block. If you choose the “Receive Coins” option, you will receive a coin for each building already selected at the intersection. Coins are circled in the supply of coins. When all coins are circled, the action “receive coins” cannot be selected.

If coin work is chosen, all four dice will be picked again at the end of the turn. In your turn you choose two dice (one blue and one yellow) and place them on the player’s block. The other two dice are passed in turns.

Earned coins bring the following benefits in the game:

1) Change the number of points: for a metal can in front of the train The number one dice can be turned up or down. No alternation from 1 to 6 and vice versa. The modified dice are now placed on the player’s block and can be used for the actions “Create Token” and “Receive Coins”.

2) Check two buildings: you can get three coins After marking the building If a “tick mark building” is performed, a second building that has not yet been used can be marked at the crossing point. Then all four dices are re-selected. Two are placed on your player’s block, and the other two are passed. 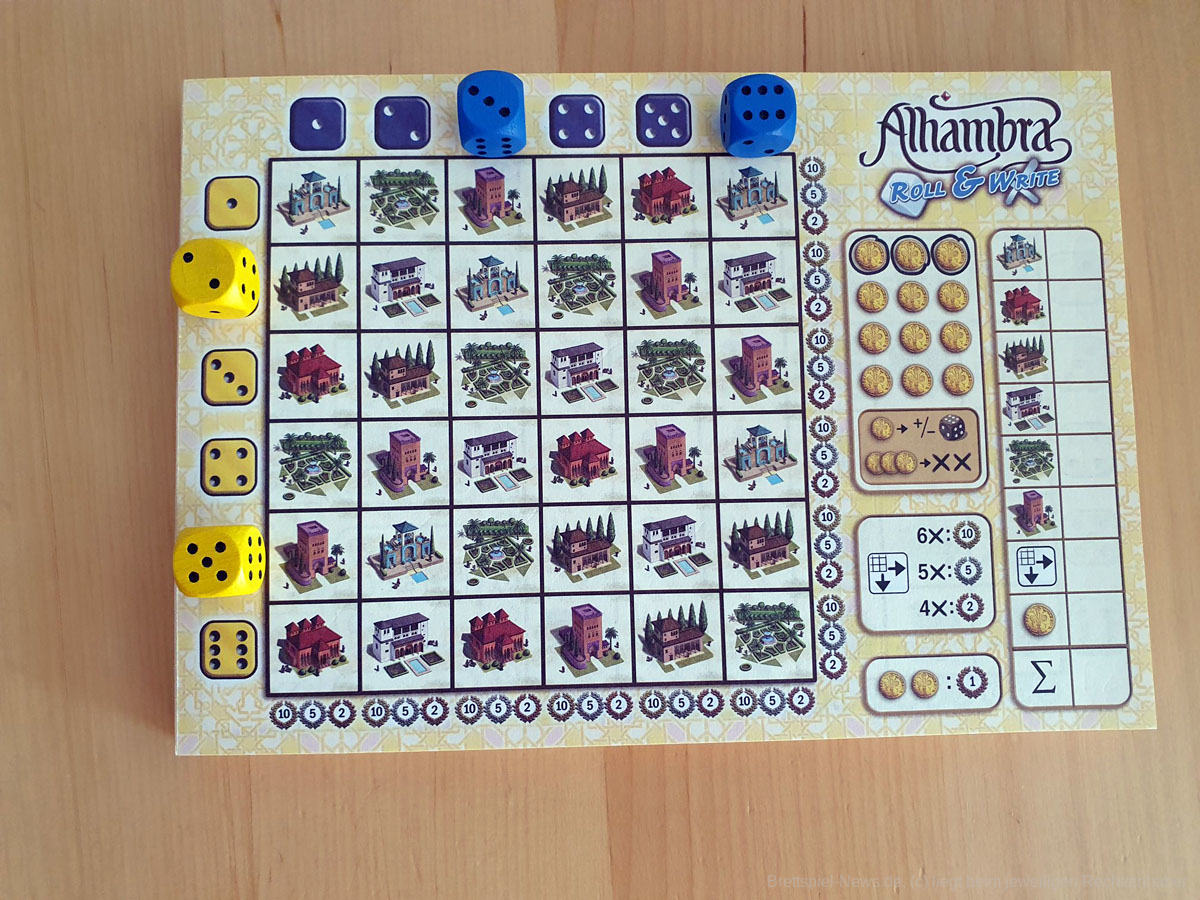 Who built the most beautiful Hamra?

After the last round of each match count is over, the final scoring takes place:

Building types:
Victory Points (VP) are awarded for each building type depending on the 1st, 2nd and 3rd positions in the point block. In the event of a tie, the corresponding VP is shared. The result has been rounded up.

Coins:
For every two coins circled but not crossed out, you receive one vice.

See also  Review: "So Much For This World" By Rainer Klingholz - Politics

As expected, ALHAMBRA ROLL & WRITE consists primarily of blocks, dice and pens (the latter not included in the game) in a handy package that’s twice the size of a pocket game. Unfortunately, it’s not as small and easy as other Roll & Write games. 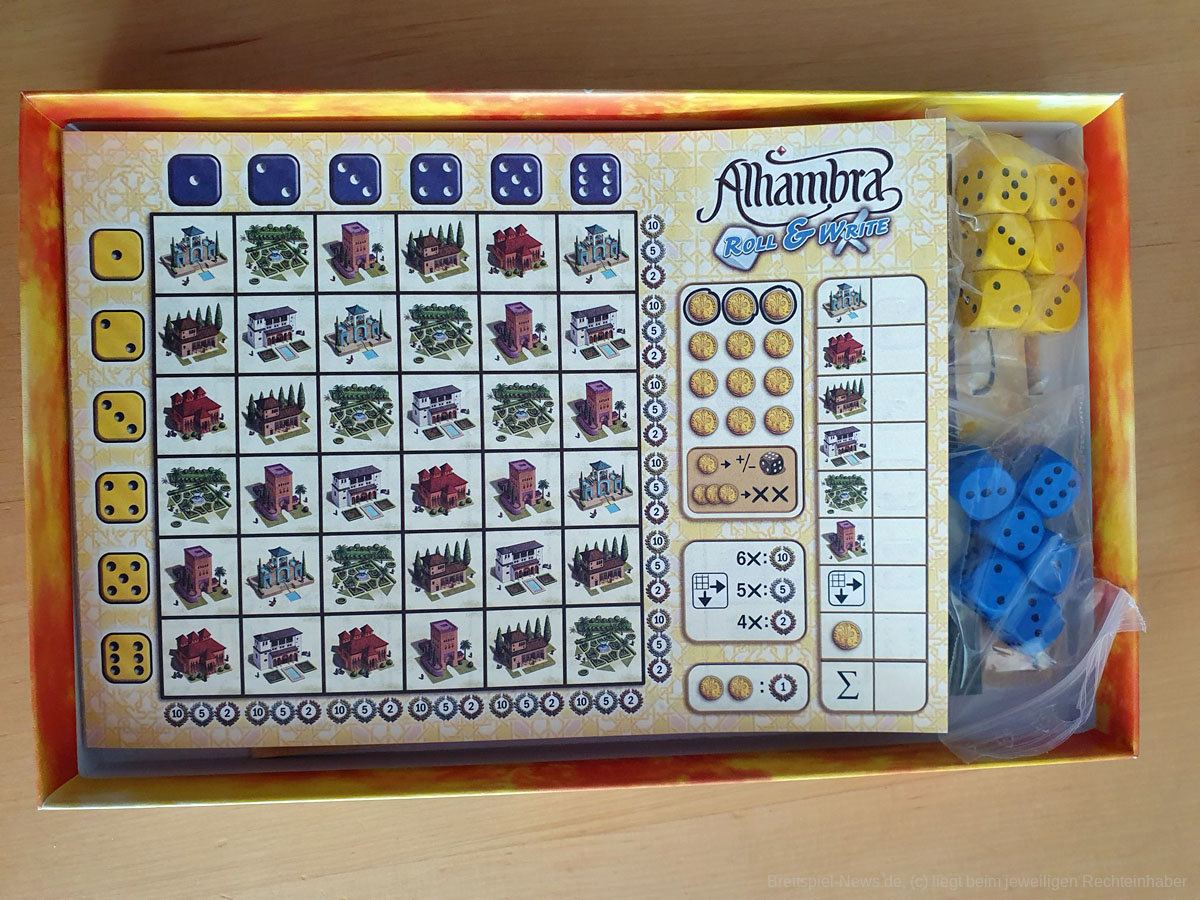 All blocks are printed on both sides and colored very accurately. The graphics are unfortunately so small despite the game’s size being just over Din A 5 that it’s hard to see the differences between the buildings and the little dots on the bitmap.

The cubes are made of wood and beautifully colored.

The 12-page instructions are available in German and English. The instructions describe the individual sections of the game very accurately and are very well explained. Entry into the game is possible immediately. The instructions also contain special rules for single players and individual variants. In the single variant and the two-player variant, fictional players are also played in order to create the necessary competition.