Trees of different shapes and colors, birds and fish, lotus flowers and peonies as well as elegant wings and bridges, you can discover all of this at TANG GARDEN. The park looks different every time you visit and thus attracts different people.

SKELLIG GAMES made our TANG GARDEN available for us to review.
This does not affect our rating!

Expanding or decorating the garden?

TANG GARDEN is a tile-laying game where a Chinese garden is built together and decorated with trees, animals, plants, bridges and pavilions. Plus, people are placed in the park while the game is going. This allows players to collect coins (either directly or at the end of the game). Whoever has the most coins at the end wins. 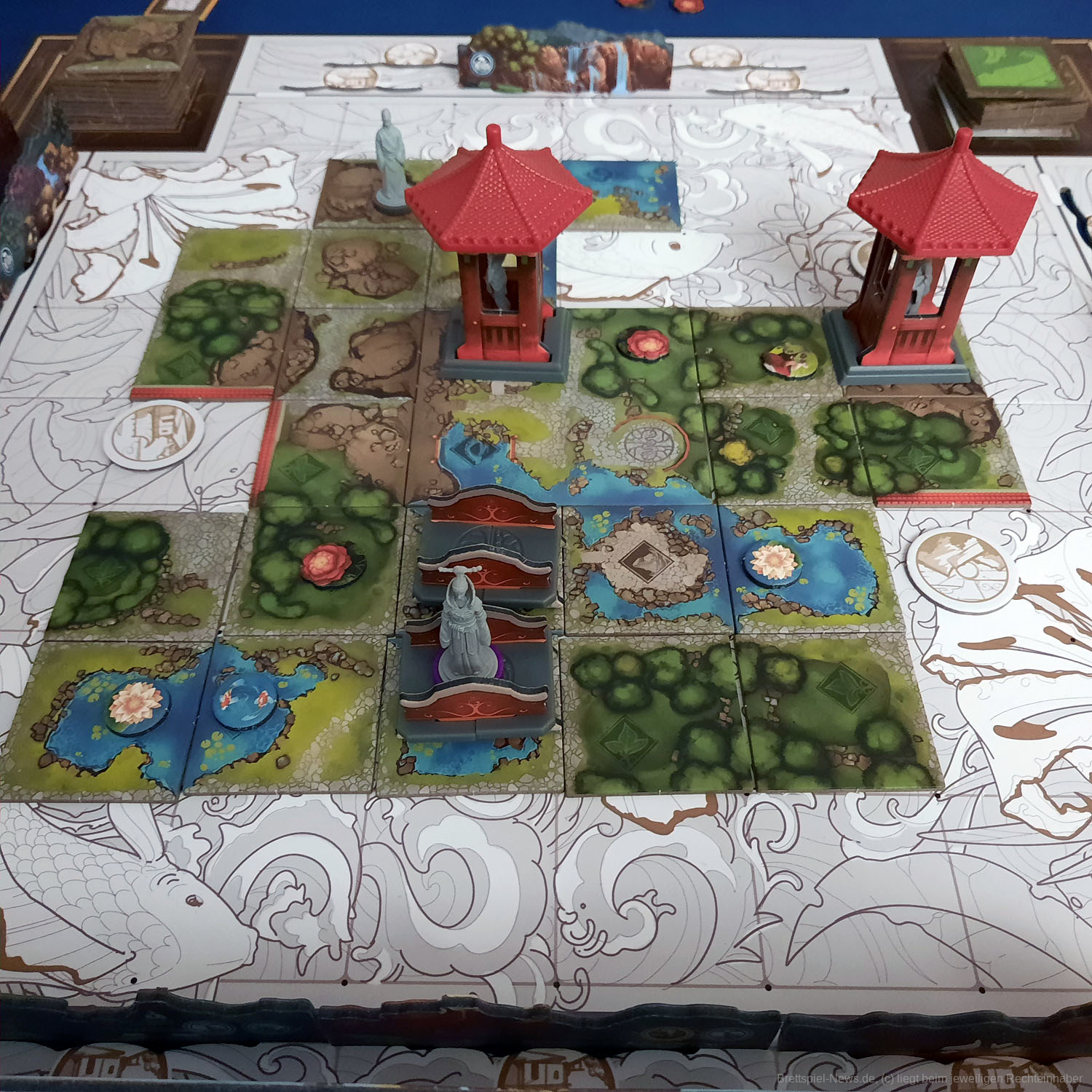 At the start of the game, each player receives a player board with three dice for different types of terrain (water, forest, and mountain), four lantern marks, and a starting character. Additionally, the shared gamepad is positioned in the middle. Small and large landscaping markers are placed on this, a small landscape is inserted on each side, starting tiles are placed in the middle and the four garden piles are set up at the edge. In each round, each player may take one main action (laying tiles or decorating tiles) and one or more secondary actions (insert a lantern, refresh a lantern and / or character’s place) The game ends after the round in which only three or fewer of the corresponding markers remain. Nature on the game board or one of the four garden piles is empty.

Laying tiles: With this action, the player may place a tile facing upwards from one of the garden piles. There is a stack for the three types of terrain which are mountains, forests, and water and another stack in which different types of terrain can be found as well as walls and temples. At least two garden tiles are laid face up, at most four. Tiles are flipped if, after the turn of the player, only one piece remains exposed or if the “tile decking” action is performed. New slab must be constructed orthogonally and the landscape or path type must be run. The exceptions are walls and temples that can be placed on any type of terrain and on paths. For each aptly designed terrain type, the corresponding block can be placed in front of your player board. If this completes the area, even two steps. For each track placed on another track, the player receives one coin. If tiles are placed on several tracks, any type of terrain can be moved one more step on the operator panel instead of two coins. Temples bring in a coin as well as the color of the adjacent terrain. If a horizontal marker is covered when laying tiles, the player takes it and is allowed to insert a corresponding horizontal board (small or large) on the edge of the field. These parts of the scene are important when counting coins for some characters at the end of the game.

See also  This cell phone is almost like a Bluetooth speaker

Decorate tiles: When decorating, the player can draw 2 decoration cards plus one additional card for each pile without exposed garden tiles. He may choose a card from among them and place it in front of him, provided the opposite decoration is placed. With some decorations, the player is also given a move on the player board or allowed to take the landscape mark off the board. After the tiles are decorated, all the inverted top garden tiles are flipped over on the piles. Decorations bring coins in various ways at the end of the game. In the case of trees, the number of coins possessed by different tree species increases. As a group, animals and flowers bring six coins, the two bridges and two wings bring the player more twelve coins and the runner up six coins.

Character placement (side action, immediate effect or using character tag): This additional action triggers when all three terrain markers on the trigger panel have reached the corresponding fields. With this additional measure, a character card with the corresponding miniatures is taken from the character show or from the drawing pile and placed in front of the operator. Then the player places a miniature of his character on the field. If he is unable or unwilling to perform this additional action, the player may take a personal mark allowing this action to be carried out in a later turn. However, once this action is triggered again by the player board, the previous character mark should be eliminated without any effect. At the end of the game, characters bring coins for some garden tiles on the game board or landscape tiles on the edge of the field, which are in the direction of the miniatures. In addition, some characters have an active ability with which they bring the owner a reward for a certain action, as long as the miniatures are in front of him. 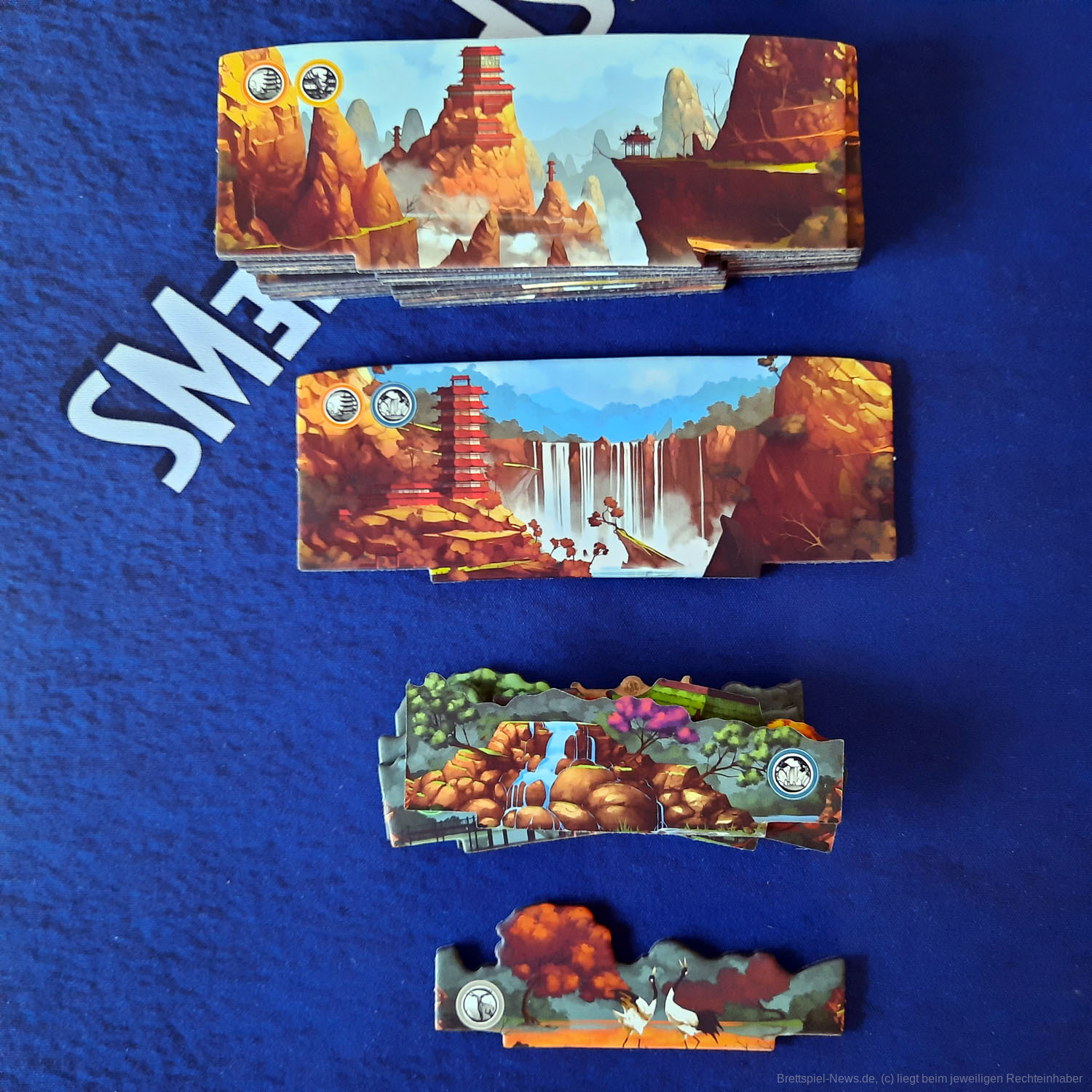 Use the lantern (side work, max 1x per round): During this procedure, one of the four different lantern tiles on the trigger panel is inverted and the corresponding effect is applied. Two open pieces can be placed instead of one open tile on the first lantern. For the second lantern, after looking at the decoration cards, you can choose two instead of one. With the third lantern, you can change the position of your character on the field and / or change the direction of vision. Using Lantern IV, a garden pile can be searched for a tile during the Place Tile procedure and it can be placed or the character pile can be searched for a character during a Place Character procedure.

Refresh the lantern (side action, any number of times per round): During this procedure, the lantern can be turned over again and thus ready for use again. To do this, three (four in a two-player game) of the same landscape signs must be abandoned.

In addition to the multiplayer version, there is a single-player mode. The goal is to fill 28 interior spaces around starting tiles with garden tiles. With every garden tile, a decoration card is flipped and added. This should also be applied after the tiles have been laid. In addition, the player board is dispensed with and the player receives coins for all actions, which in turn leads to more characters entering the game. If a character or decoration cannot be placed in the game path, the game is lost. In this variant, the player again has four lanterns as auxiliaries, which aid in his abilities to place or exchange cards without decorations.

The material of the game is of good quality and made of thick cardboard. Miniatures are solid, but despite the colorful rules, they can only be distinguished by close examination. Tiles especially landscape paintings are well illustrated, only landscape signs are relatively simple. Since landscape signs can only be distinguished by their illustration, you should also look carefully here. The sorting attachment allows for safe storage, as everything has to be put in place to fit. In general, you should set aside some time before the first game to unload, collect, and prepare game materials. 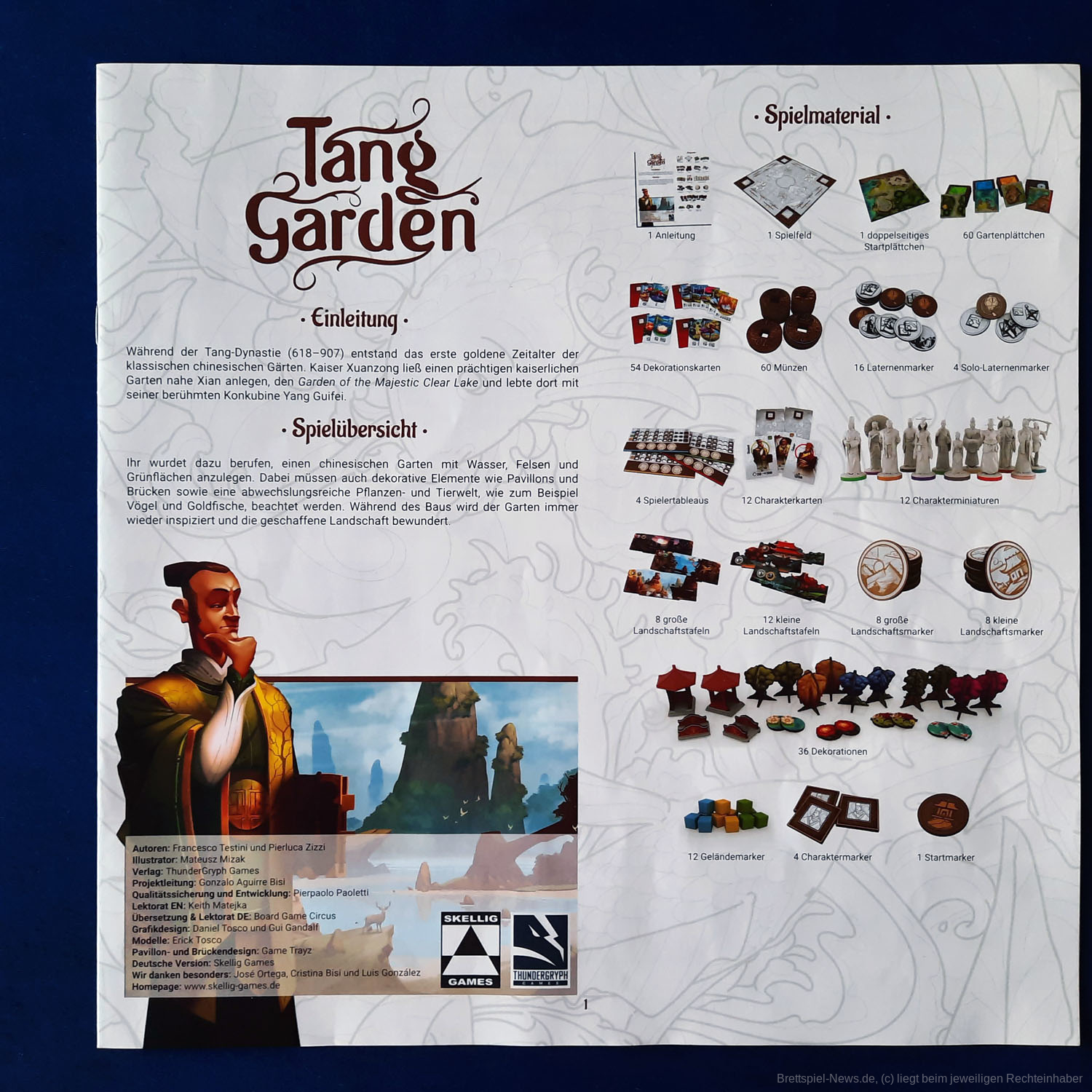