“Same as last year, Miss Sophie?” – “Same procedure every year, James!”. DINNER FOR ONE has become an indispensable part of most TV sets on New Year’s Eve, so we’re very excited to slip into the role of James and serve up Miss Sophie’s foods and drinks one by one. But what happens when you don’t remember the correct order? Will soup be served first, or do you want to say a quick toast to Miss Sophie? Oh wait – the legendary tiger head, I still have to stumble upon it! Look forward to a hydrated and happy evening and be careful not to get off script!

RAVENSBURGER made dinner for one available for us to review.
This does not affect our rating!

Who is the most successful James?

The principle of DINNER FOR ONE is simple: the player flips the card, reads the instructions out loud and puts it down. All players memorize the card, because in the following rounds everyone must have played the card again in the specified order – without errors. There are a total of four courses to be played through. Each course begins with a drink menu. 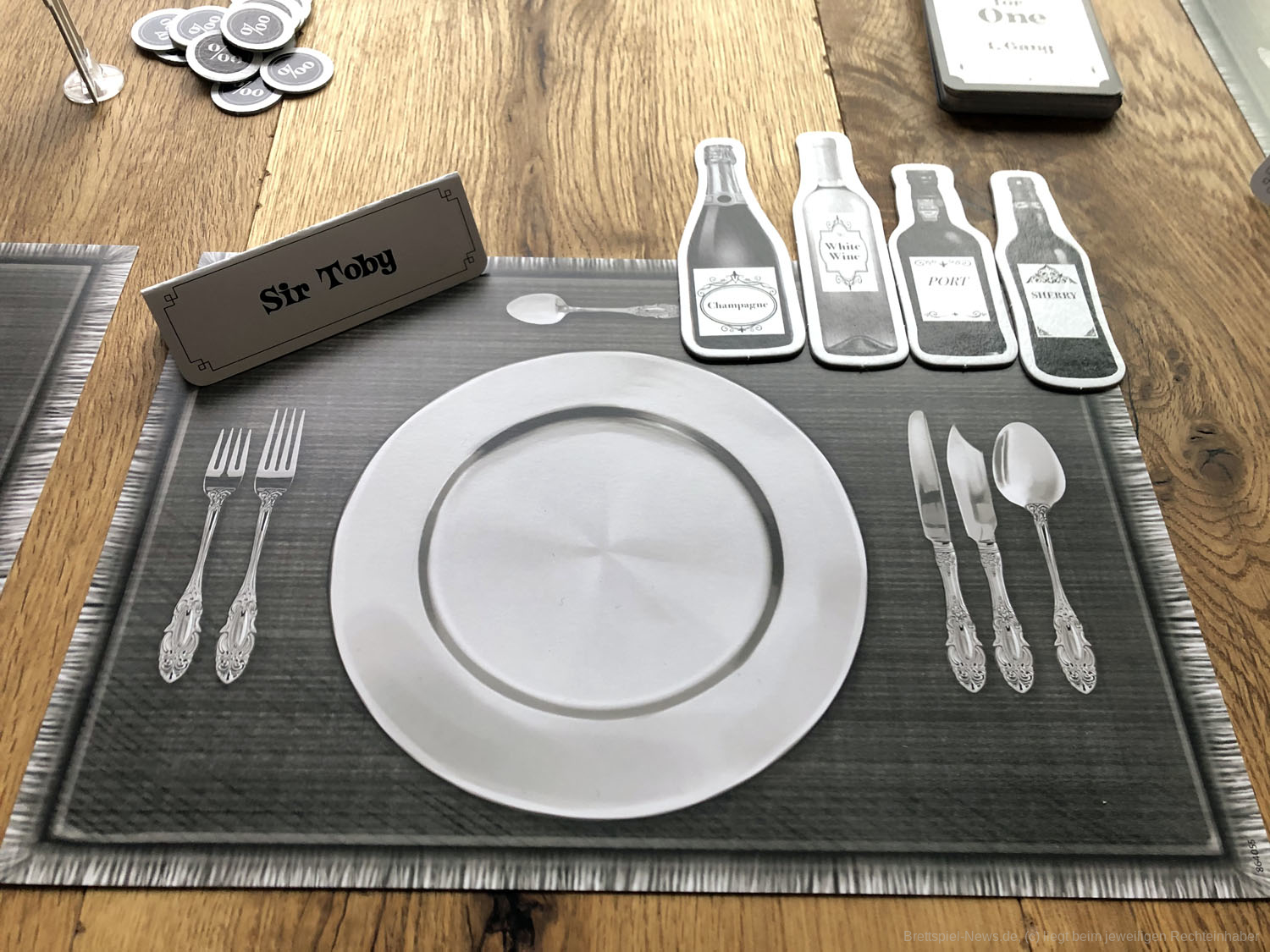 The starting player reveals this and the instructions on the card are applied to all players. This drinks list has it all – depending on what’s served (champagne, cherry, white wine or port wine), there are first guidelines that apply throughout the game. So everyone can have to put a bottle of wine on their palm or press it between the head and shoulder. Once that’s done, the script actually starts. The player who revealed the drinks menu may also reveal the script’s first instructions in the form of menu order cards or guest cards.

The correct meal should be served with menu order cards, with guest cards, the guest typical procedure should be reactivated. As an added measure with Wish List cards, care must also be taken when tripping over the tiger’s head if it’s on its way to Miss Sophie – just like in the original. The card is read aloud, everyone memorizes the instructions and the first player performs them for the first time. Now it’s the player’s turn to his left and he reveals the next card. The same procedure – the card is read out loud and placed face down. 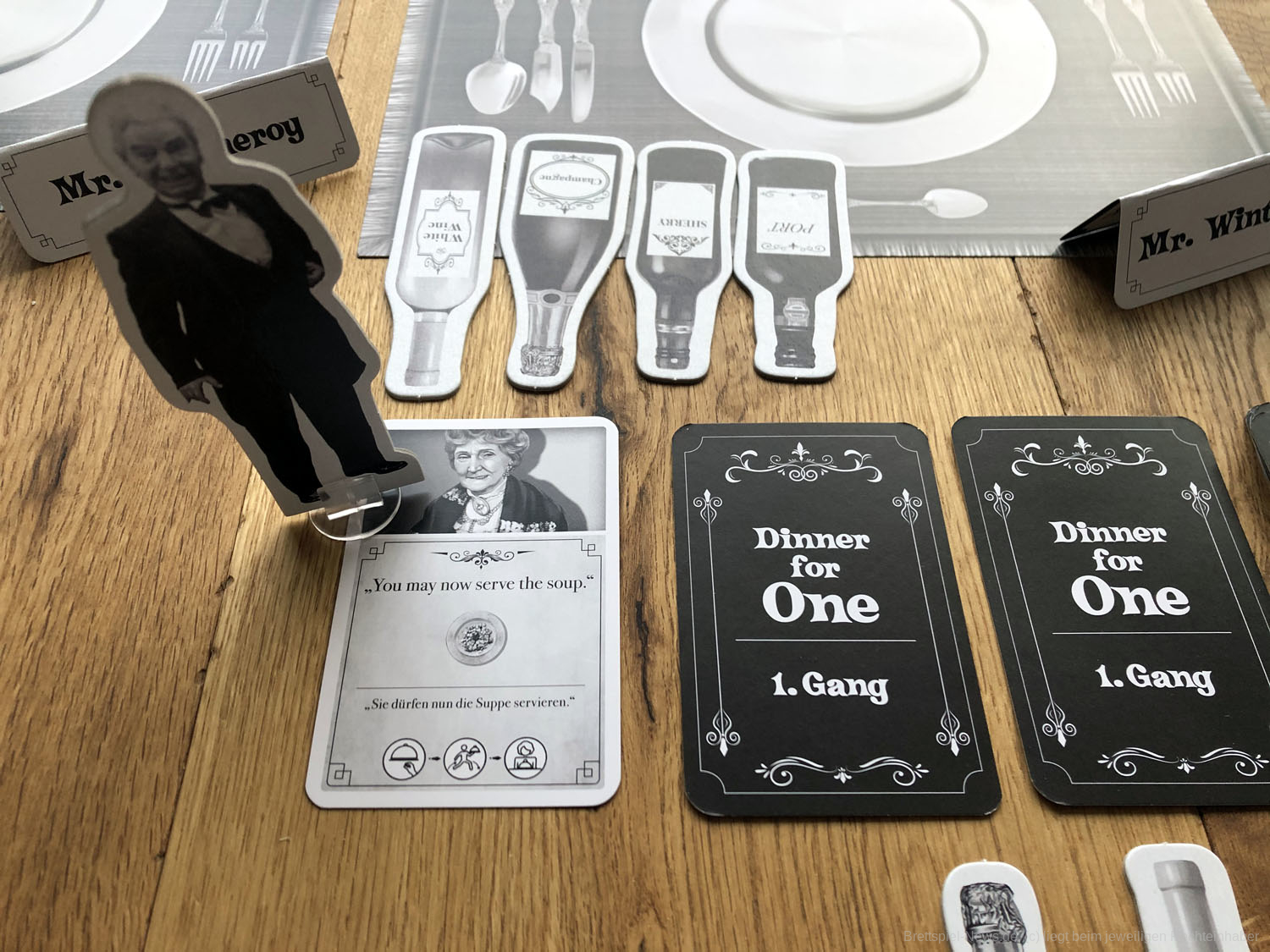 Now, however, the player must also follow the instructions for the first card in the row correctly. If he does, it is the next player’s turn, revealing a card, reading it out loud and playing the instructions on his predecessor’s card. However, if a player makes a mistake and does not stick to the ‘script’, he receives a passing chip. Additionally, the round ends at this point and cards that have been dealt correctly by then are placed on the discard pile. The new round now starts with the card that went wrong.

So it continues with all players in turn until all cards have been played or all batting chips have been used. The player with the fewest chips wins the game. One of the faster variants states that the game ends when the first player collects three passing chips and another variation can be played with only eight chips instead of fifteen.

Game material comes in a matching black and white box thematically with James and Mrs. Sophie on the cover. In the box itself are 5 placemats, name cards, 4 plates and 7 x 4 bottles made of cardboard. James shape and flower vase shape have small feet. Different cards are printed for different courses with different instructions and toast. The legendary tiger head is also made of sturdy cardboard. 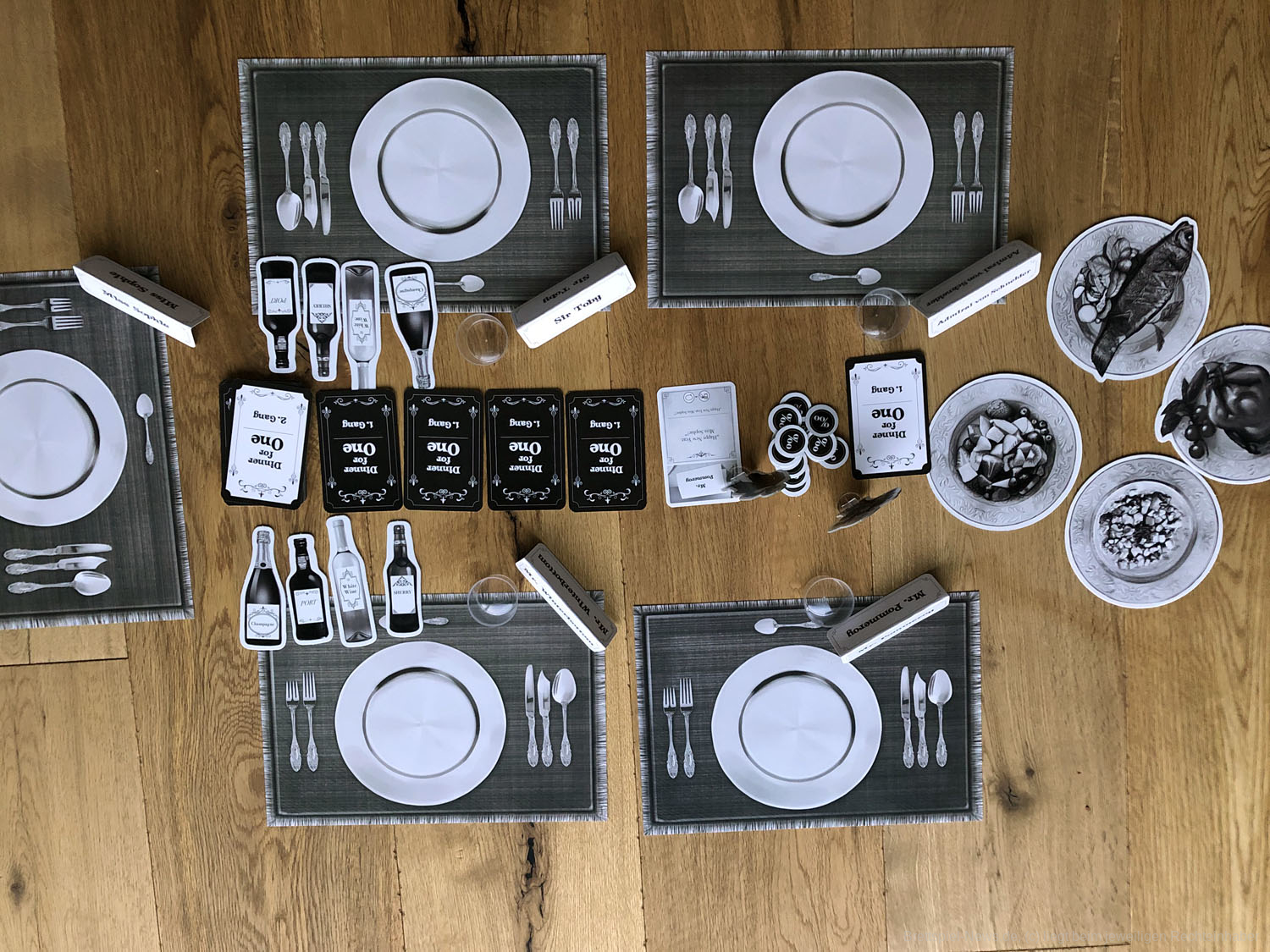 Also included are 4 small plastic cups, some “Schweppes Chips” and instructions. The cardboard parts are attached to a die-cut plate and can be separated easily. The only thing that looks a little fluffy is the placemats. Especially when you refill the small cup and something goes wrong, the placemats won’t last long.