Over the millennia, the peoples of the Earth have searched for the unknown beyond their borders. It has always been a source of curiosity, but also a source of great fear for people. Only the bravest of them set out to new shores. They met other emerging peoples, settled in new countries and made history.

With the expansion of TERRA INCOGNITA, Asmodee is also trying to focus on the search for the unknown and the transmission of civilization – a new era closer to the video game paradigm. In our test you will find out if we succeeded and whether we go to new beaches for civilization games, or rather swim in the shallows.

ASMODEE MAKING CIVILIZATION – TERRA INCOGNITA AVAILABLE FOR REVIEW.
This does not affect our rating!

Departure into the unknown – and into complexity

The expansion doesn’t completely reinvent the base game in a playful way. Players continue to use their Focus Bars in actions and work toward preset goal cards. However, a lot of new items will be introduced, such as armies, neighborhoods, and fortresses known from the current part of the video game. These innovations increase the complexity of the game, but also bring it noticeably closer to the model.

However, it is already clear upon preparation that the TERRA INCOGNITA expansion will make the core game more complex. While players have set up the entire playing field from the start, they are now starting with some starting center parts, parts of the capital map, and new castle markers. The rest of them want to explore. 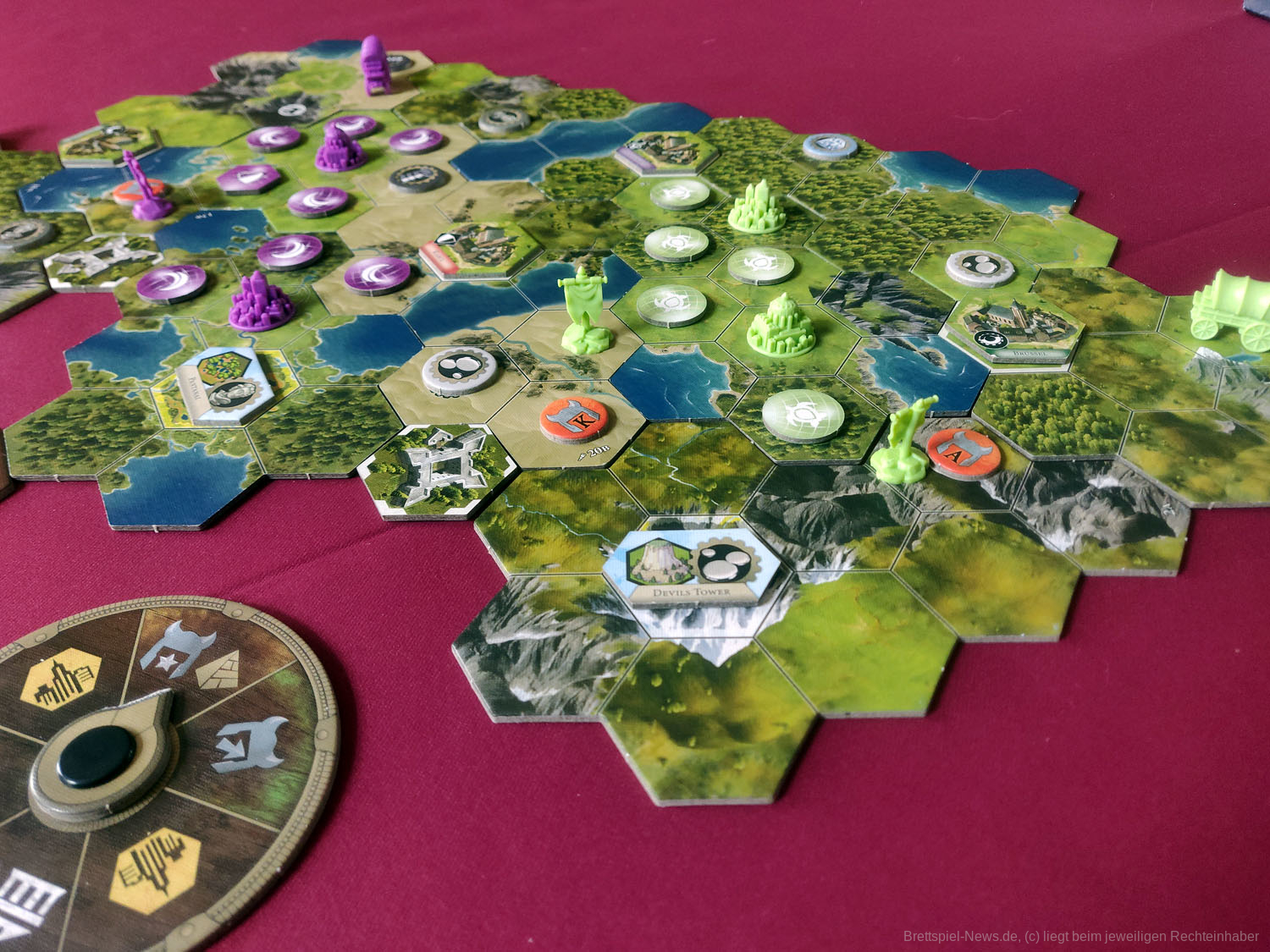 The aim of the game is still to achieve goal cards (these are now called “victory cards”). Now there is a much larger selection of them, but mechanically they don’t bring any big surprises. Various types of wonders of the world have to be built, and a certain number of level 4 technology cards have to be hunted down or all areas are built. The two new ones are the two Castle Victory cards, which are also featured in every game. So castles have their importance in every game. But this is not the only difference between the new victory cards, because unlike ordinary players they can: lose castle victory cards again once they meet them once. In addition, four of the five goals presented now must be completed.

The lap sequence remains largely the same with the stretch. The focus bar remains at the heart of the game. In each round, players choose one of their focus cards and perform the corresponding action, such as army, culture, or economy. However, the focus bar has been greatly expanded. There are now military cards that replace those in the base game in order to trigger new army tags. There are also so-called “growth” cards, with which newly entered areas can be created. At the end of each round, the event disc plays as before, but now contains fields to activate circles or to change your form of government.

New army tags open up completely new military options for players compared to the base game. Enemy control signs, cities and vehicles can be attacked and captured directly without having to be in front of your city limits. This also applies to city-states, wandering barbarians, and new fortresses. Armies can be used to explore new map tiles by moving them (or alternatively your own vehicles) to the current edge of the map. Then players can: Inside a movement point – and if the space is on the capital map board – reveal a new area. Provinces also provide more tactical options for the game. For example, additional research points can be created with the help of a campus area placed in the mountains, while a theater area allows you to place your control signs away from your city. This way you can expand your sphere of influence beyond the boundaries of your city. You can also access various resources such as marbles or diamonds in this way. Forms of government interfere with the game mechanics less intensely, because the new form of government only offers a reward for certain actions in the focus bar. For example, an economy card can be treated as if it were two spaces to the right of the focus bar when choosing an oligarchy.

See also  How Yash Chopra believed in the legend of Santoor Shivkumar Sharma, gave us Silsila, Lamhi, Chandni and Dar 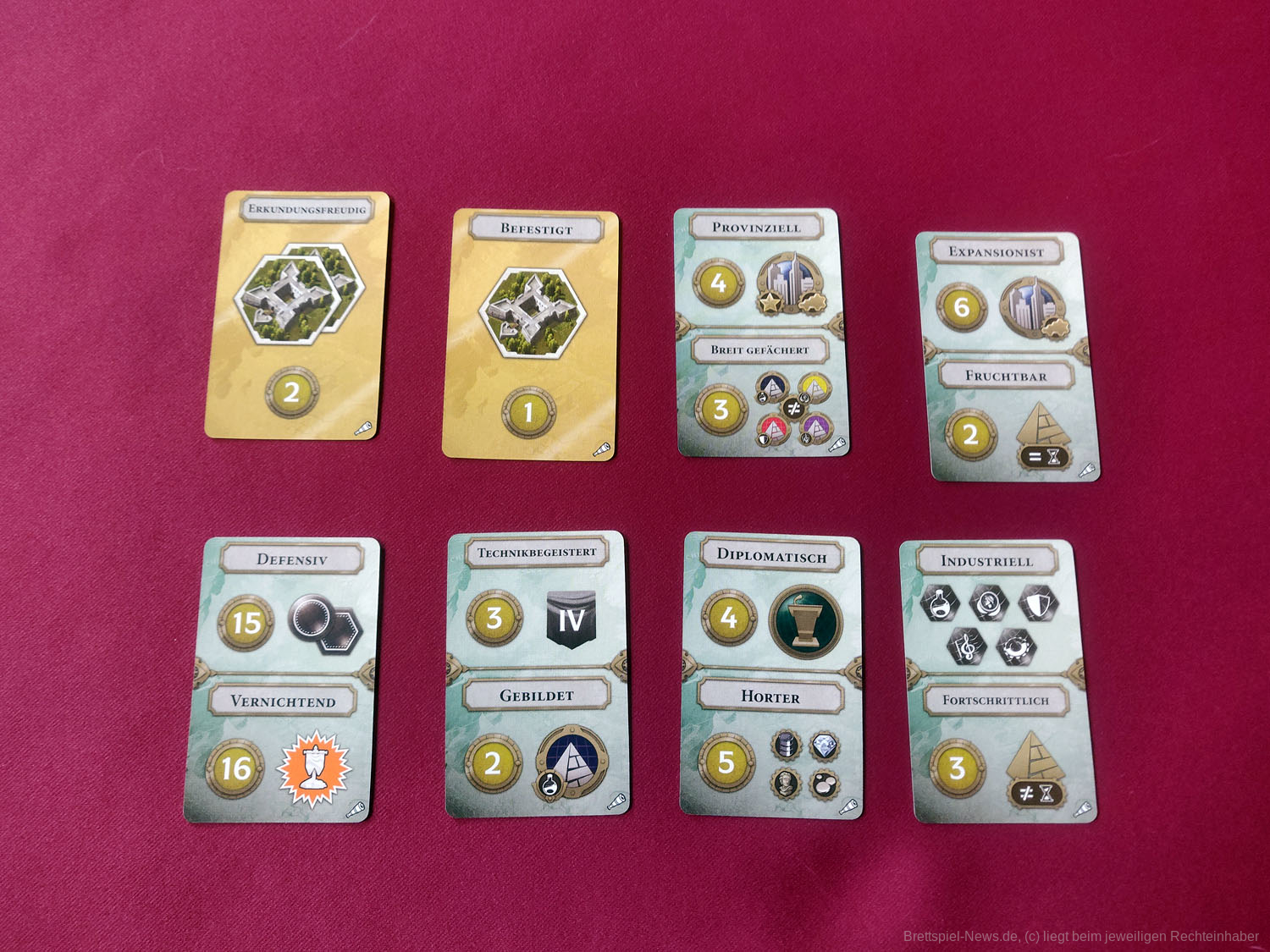 Less material has never been more

The many innovations and changes brought about by the TERRA INCOGNITA expansion bring with it a whole range of new materials. In addition to the aforementioned new victory cards, capital map tiles, forts, government signs, regions, and army as well as new focus cards, there are more new features in the expansion box. There are ten new leadership cards with an overview of the region at the back. In addition to the game material for a fifth person, there is also more that is already represented in the base game. New Wonders of the World, Diplomatic Cards for Players and City-states, Expanded Focus Columns, more Resources, Natural Wonders, Control, Trademarks and Barbarian plus more Water Fields and Natural Wonders are available.

The box itself is a very thin and thin box in terms of material thickness. Extension components fit in the somewhat grotesque triangular boxes inside. With a little effort and a lot of small zip bags, all of your expansion materials can be zipped into a basic toy box. Without your own sorting systems or bins to store many different tags, it quickly becomes a huge mess. 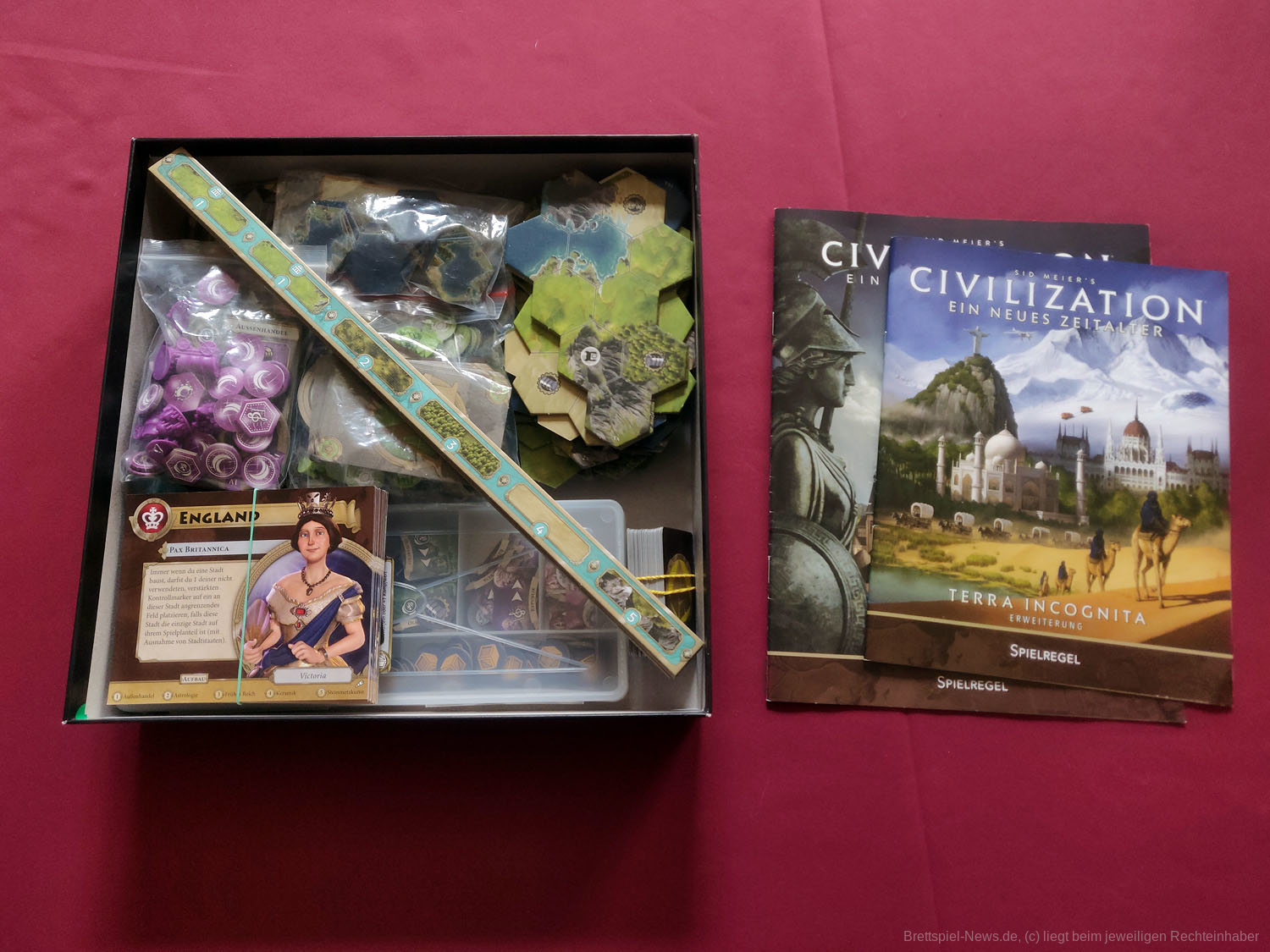 The instructions were one of the main criticisms of the base game. The new instructions follow the principle of the old and first describe the new game material and structure, then the new elements of the game such as forts, provinces, armies and the exploration of new parts of the map. Some central game terms and some clarifications about some cards and abilities are also explained. A brief overview at the back of the instructions explains the rules of combat in a more compact way and we also find a list of all the new victory cards there. However, there is still no compact overview of the moves.