Insatiable greed written on your eerily crooked face. “Sweets! Bring me more sweets! More! Right away!” You shriek KingdomS CANDY MONSTERS in their iron cages. With their sharp and almost deaf voices, they join your raucous desire, fully aware that you are about to release them from their captivity. Because you send it all over the kingdom in order to steal the most colorful and delicious sweets yourself

SKELLIG GAMES has supplied us with candy monsters from the kingdom for your review.
This does not affect our rating!

Kingdom’S CANDY MONSTERS is an engine builder for 2 to 5 players, ages 12 and over, where players send their monsters to the furthest corners of the kingdom for 30-60 minutes to collect candy for them. If you can control the strongest monsters and store the most sweets during this time, you will win the game. 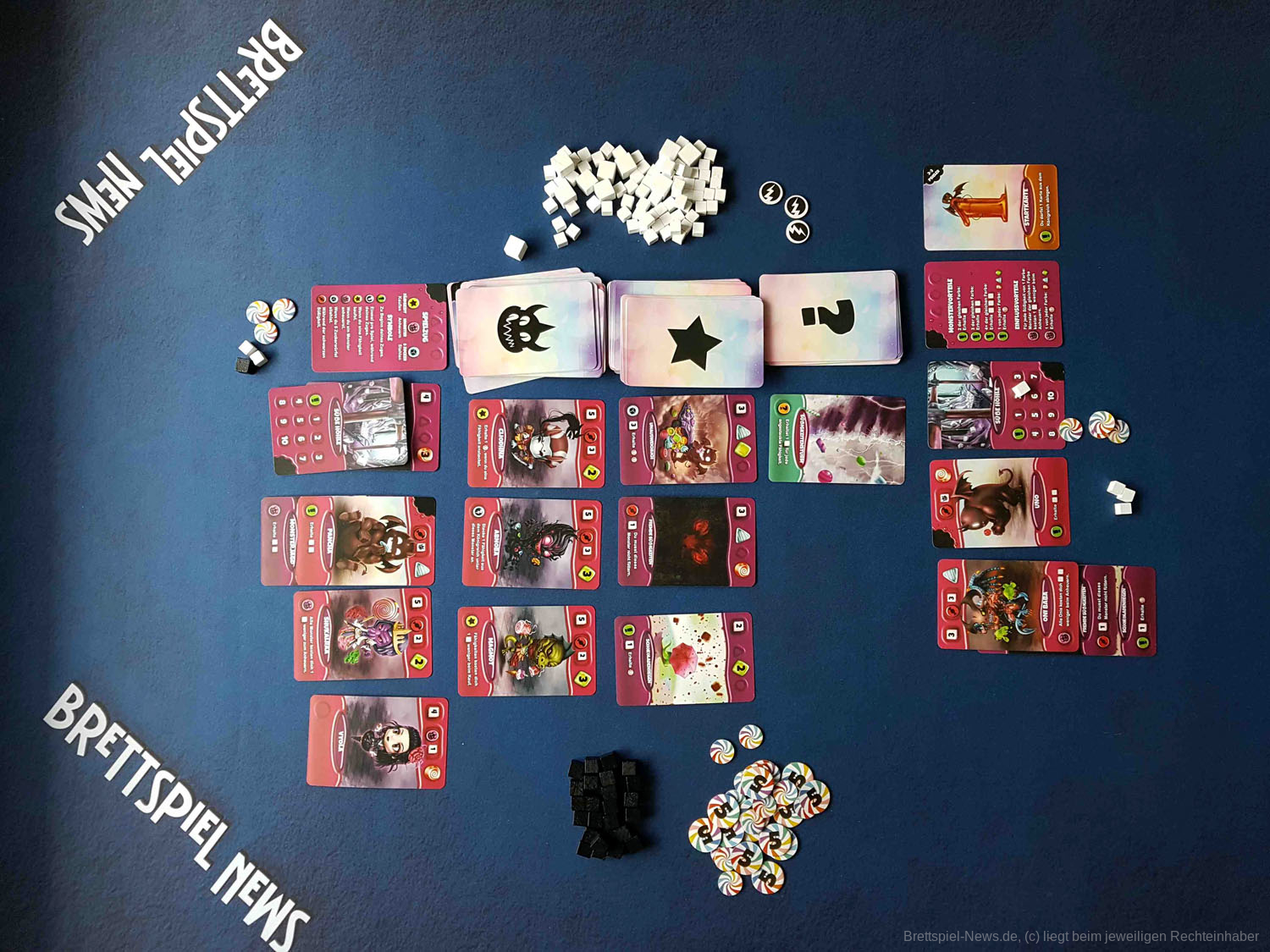 At the start of the game, players receive: inside a cute cave, a novice monster and some sugar cubes as the starting capital.

They spend these sugar cubes in turn either to hire new monsters or to equip the monsters under their control with powerful abilities. In the event that players run out of sugar cubes, they can alternatively steal 5 sugar cubes and prepare themselves for the next round. But how does that work in detail?

If Players Buy: Inside the Monster Card, you must first rent the Monster with the corresponding number of Sugar Cubes. Each monster has an ability that can be activated at different times in the next game track. An example of this is that the owner of a monster receives two sugar cubes every time he purchases a Power Card.

However, such a beast also wants to remain happy by feeding it sugar cubes frequently. Fortunately, the monsters themselves also bring sugar-worthy perks if players control indoors several monsters with the same candy colors. For example, if a player has a red candy and a monster with them, an additional sugar cube is given to them at the start of the round. 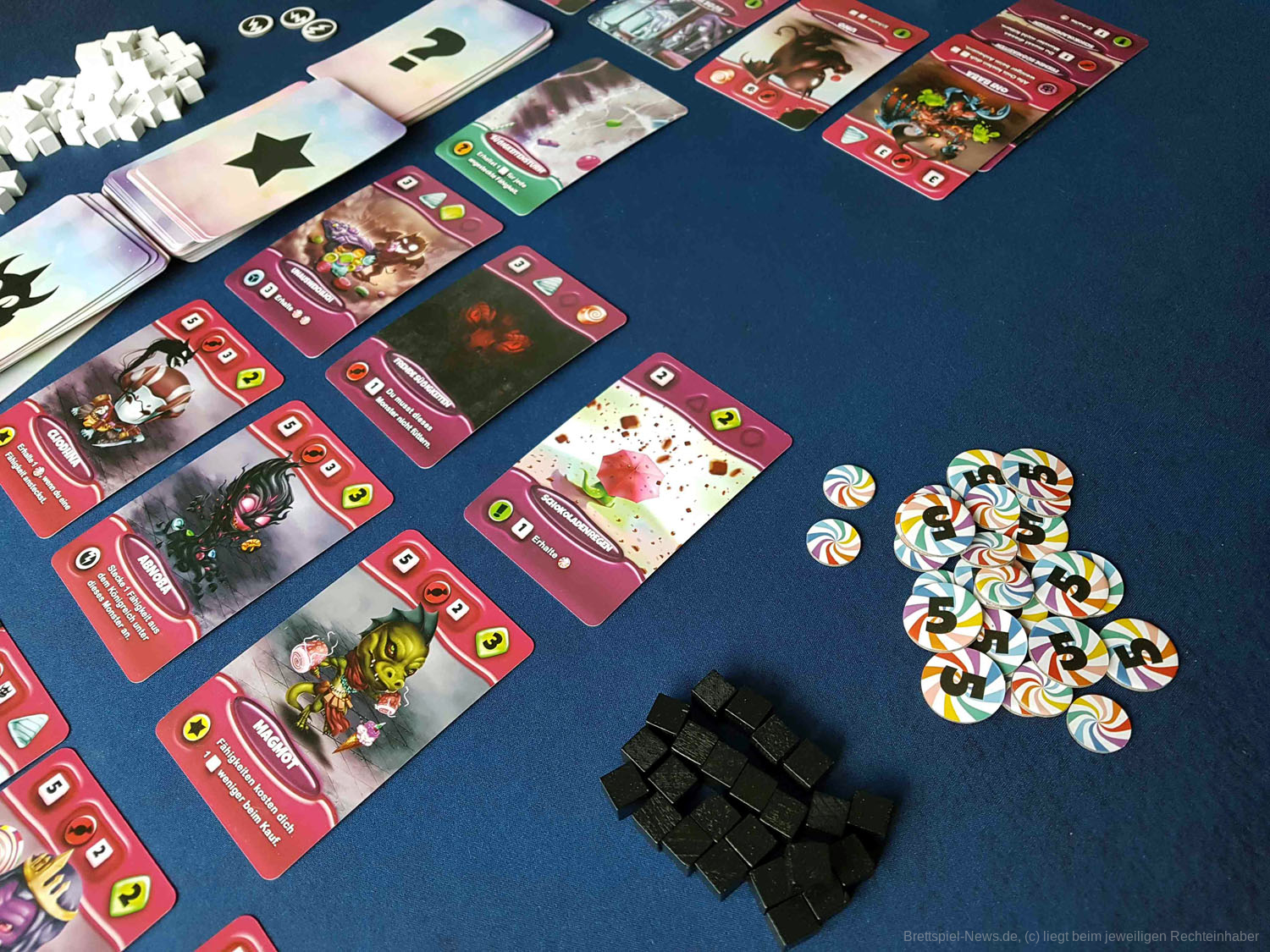 In addition to monsters, players can purchase skill cards. They can be infected with monsters, which gives the monster a new ability and thus becomes more powerful. Alternatively, you can keep the card to increase your impact. In this way, players reduce the cost of hiring more monsters in the long run and also get important victory points.

After all players take one turn, the event card is played. Either the weaker players receive a bonus inside or a black candy is revealed. In this case, the monsters must be fed with cubes of sugar. If players cannot do so, they receive black sugar cubes, which have fewer points at the end of the game. However, by giving 2 cubes of white sugar, the cubes of black sugar can be discarded later.

Then the starting player changes and a new round begins. The game ends once the last four pieces of black candy are revealed and executed.

Players then get points for their monsters, ability cards, sweets, and remaining sugar cubes. The player with the most winning points wins Kingdom´S CANDY MONSTERS.

Lollipops and loads of sugar

The extra-sturdy Kingdom’S CANDY MONSTERS box is decorated with a cute devil who loves his adorable gifts. Both the monster and the title characters of the game itself are engraved on the cardboard in a rich black color, which gives the box a very high-quality impression. Unfortunately, there was also a slight error in the information regarding the number of players in the box. While the box indicates that Kingdom’S CANDY MONSTERS is only intended for 2-4 players, the game can actually be played with up to 5 players at the same time.

See also  Do you like garlic? A charming book about two old men ... 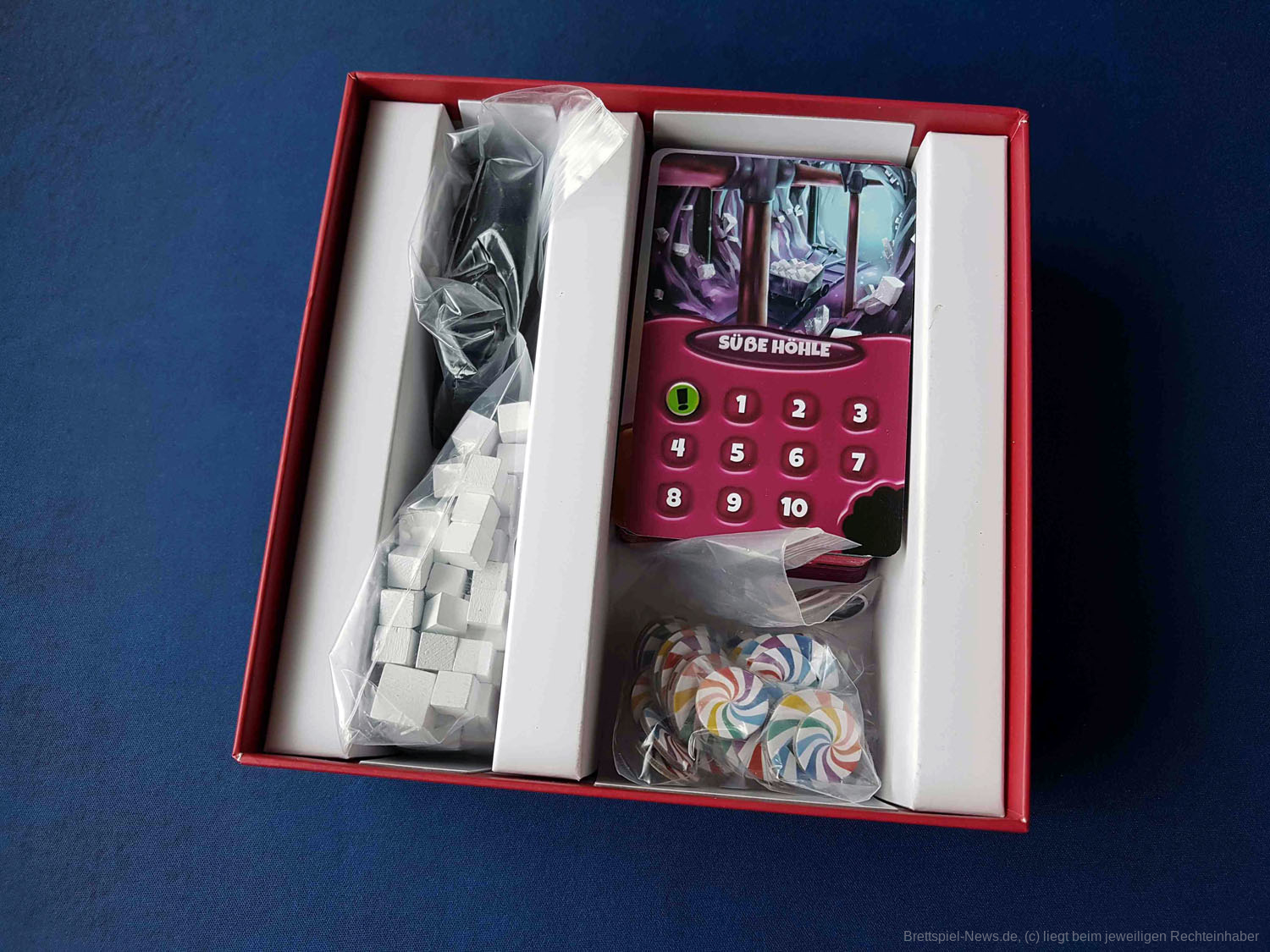 When you open the box, you will first notice the wooden sugar cubes and the colorful sweets, which represent the resources and victory points in Monsters of the Candy Kingdom. Additionally, the game has a total of 90 cards, which come with cute and strange monsters. Cards are of sufficient material thickness, but tend to curve quickly. The entire game material is held together by an unbroken cardboard accessory.

The game instructions for Kingdom’S CANDY MONSTERS explain the rules of the game on 11 pages and highlight them with color illustrations and some examples. The most important rules are also shown again on excellent overview maps, allowing us to get back to work quickly and smoothly every time. The texts of the card are also self-explanatory, and we’ve only had discussions about grammar interpretation for a skill very rarely.