In addition to the well-known classics, there are also many hidden heroes among thousands of cryptocurrencies that have huge revenue potential. One of them is the top Chinese currency NEO, which is very convincing by using the pioneering blockchain technology. In the past three weeks alone, NEO has managed to generate a sizeable return of 90 percent. An exciting and promising cryptocurrency that, with the support of many companies, has unprecedented growth opportunities. You can also take advantage of the explosive performance of undiscovered cryptocurrencies and celebrate the digital revolution!

The NEO project launched by Da Hingfei and Erik Zhang in Shanghai in 2014, initially known as AntShares, aims to become a smart global economy: the decentralized platform is used to manage digital assets and smart contracts. The basic idea is that private users who verify their identity in advance either by SMS or with a fingerprint can use the blockchain almost free of charge, while companies have to pay a fee to use smart contracts. In addition, NEO provides developers with the opportunity to implement applications that are useful to users. A practical example of an application might be an application that enables crypto-economic systems to be integrated into existing technologies. Funding requests, art, or games can also be visualized.


The similarity to Ethereum is undeniable, but NEO has several advantages that stand out only at second glance. First of all, the blockchain project differs in usage requirements: while Ethereum, for example, stands for censored trade, NEO also enables legally secure dealing. The goal is to move the “real” economy into the virtual world – with all the rights and obligations that economic people have. Sufficient reason for the Chinese government to actively support the project. The network also benefits from an extremely high transaction speed of 10,000 transactions per second. For this purpose, the Chinese platform uses specially developed NEO and NEO GAS coins. For comparison: Ethereum currently allows about 15 transactions per second. Another feature is the programming options that can be accessed. Here the Chinese network relies on popular programming languages ​​such as Java or C-Sharp. A huge advantage for developers, who can easily integrate new apps. So there is huge potential here, which has yet to be discovered, but is already evident in the course! 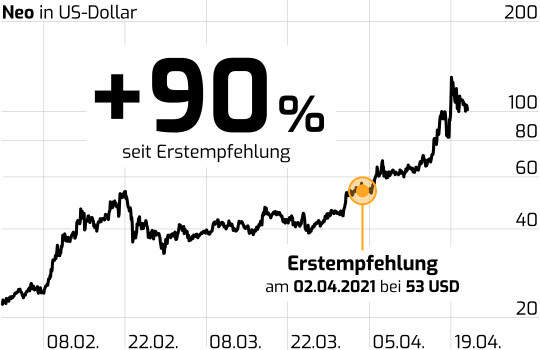 Stock market expert Gerd Fager identified this first coin just three weeks ago, and with his information, it gave investors a whopping 90 percent return – exclusively on the exchange service “Der Krypto-Investor”. In this stock exchange service, Weger analyzes the market in unconventional methods and finds such high-profile prospects for tomorrow even before the stock market boom. So that you can take advantage of it as well, you will be presented with a promising coin filter every week that has huge development opportunities.

Become a crypto investor now and benefit from the digital revolution!