It was primarily developed by the National Aeronautics and Space Administration (NASA) and was launched in December 2021″James Webb Space TelescopeIt became a hot topic by releasing the first full-featured image from July 11-13, 2022.

Given that before the Webb Space Telescope was launched, if you tried to observe a celestial body at a similar distance, you had to analyze a total of more than 1,000 hours of data obtained from multiple observatories to find it. .

The subject of this comment is one of the international research teams “CEERS Collaboration”. On July 25, less than a week after the results of the aforementioned GLASS collaboration, the CEERS collaboration pre-published two copies (a draft paper before it was formally submitted to a scientific journal) on the preprint server. Posted on arXiv.

Now, before we get into the main topic, I will explain how to measure the distance of a very distant celestial body. I’m sure you’ve all experienced an ambulance or police car siren which sounds louder when you approach and lowers when you move away. This is because the wavelength of sound is affected by the movement of the object emitting it, and it contracts and expandsDoppler effectCall.

Since light is also like a wave, the wavelength changes under the influence of the movement of celestial bodies. As the universe expands, distant objects seem to be moving away from us. Light emitted by an astronomical object is stretched as fast as the celestial body is moving away, resulting in a longer wavelength. This causes distant objects to appear closer to the longer-wavelength color, or red, than closer objects.Red square offsetCall. 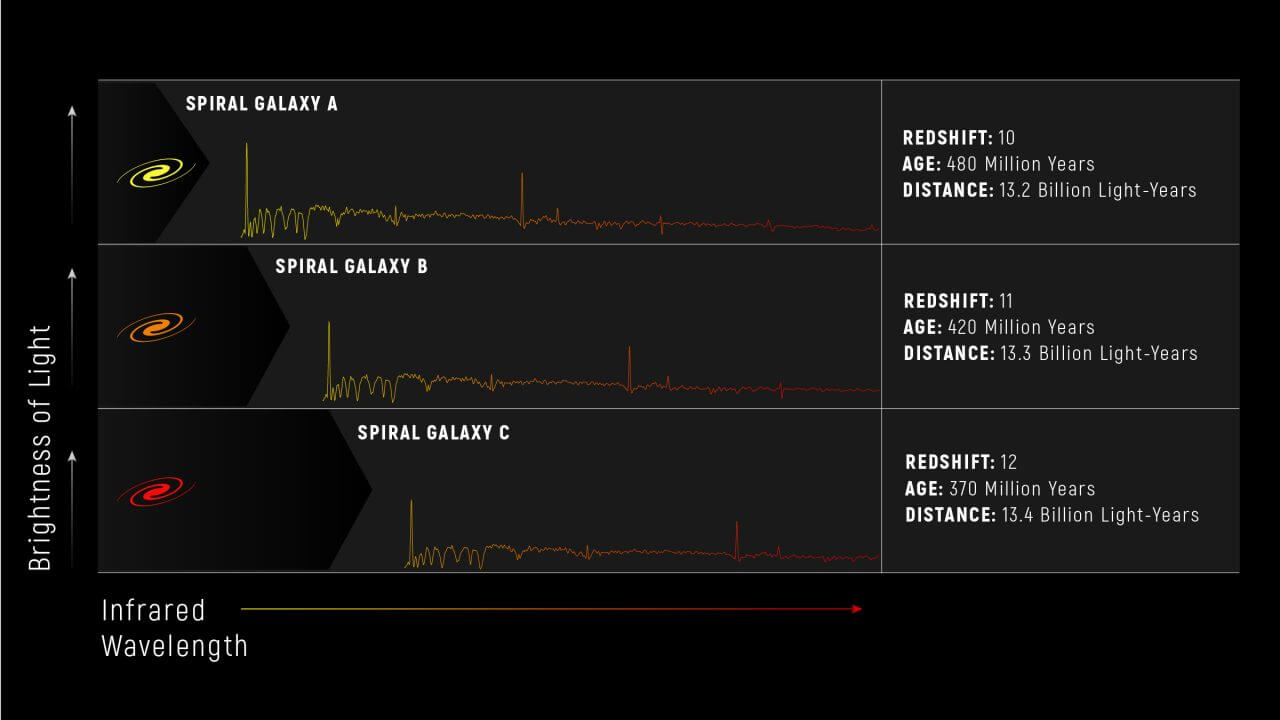 The farther away an object is, the faster it recedes, and the longer the wavelength of light. The spectrum (the intensity of each wavelength of electromagnetic waves) is about the same for each type of celestial body, but because the spectrum changes as it undergoes redshift, it is possible to calculate the distance to the celestial body by backcounting. This calculation is influenced by various physical constants related to astrophysics and is updated based on new observational data. for this reason,Redshift is a common measure of distance regardless of physical constantswill become.

It should also be noted that for objects that are so far away that redshift is used to calculate their distances, there is a significant difference between the age at which the object is and the actual distance of that object. For example, if you find something that existed 13 billion years ago, the distance to that object is 28.5 billion light-years, not 13 billion. This is because the universe is expanding and the path in which light travels is stretched over time.

So what is the historical record of distant objects based on their redshifts? Just before the Webb Space Telescope began operating, the farthest ever recorded in observational history was「HD1」It was a celestial body. This object has a redshift of z = 13.27, which means that it has existed 13.48 billion years ago and is located 33.4 billion light years from Earth.

Shortly after the launch of the Webb Space Telescope, “GLASS-z13” and “GLASS-z11” were discovered. The most distant, GLASS-z13, is an object 33.31 billion light-years from Earth that existed 13.48 billion years ago and is slightly closer to HD1. 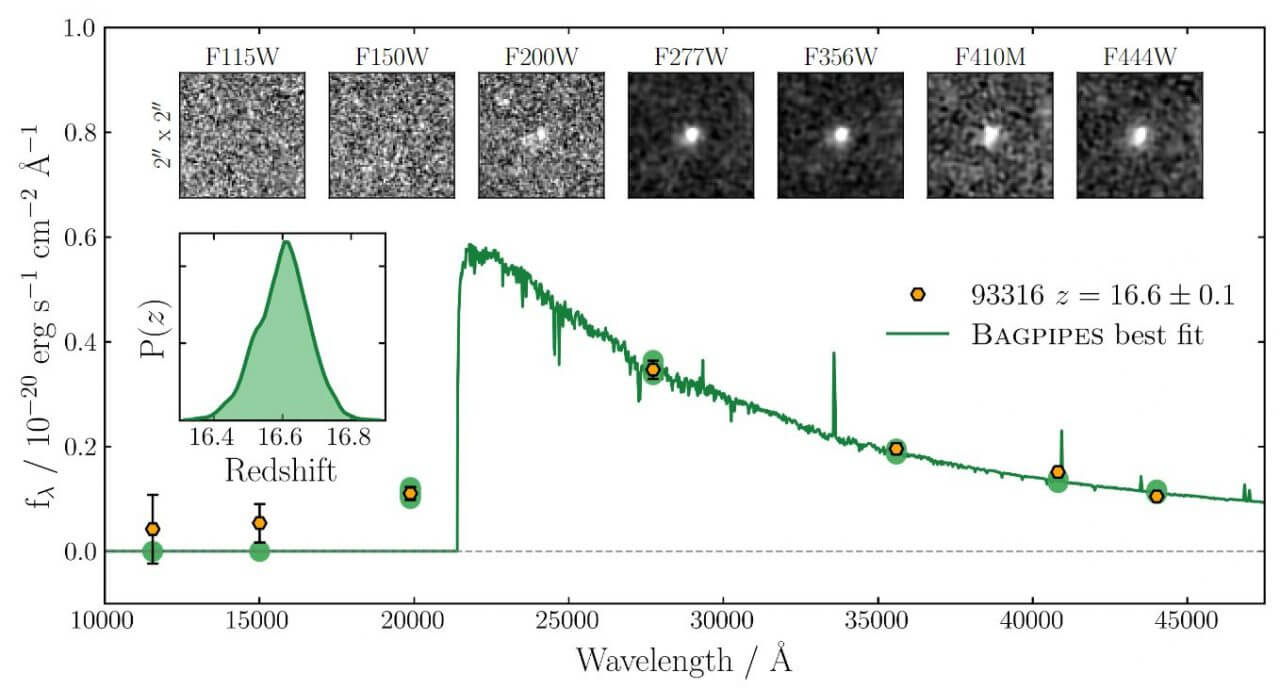 The redshift values ​​for many of the objects appearing in the raw version released this time significantly exceed these values.

As a result of this analysis, CEERS 93316 has become the farthest thing ever observed. The Webb Space Telescope immediately made a name for itself as the telescope that observed the most distant objects in astronomical history.

However, this achievement does not stop at simply rewriting the record for the longest distance. There are two big points.

First, we noticed a celestial body that existed at a very ancient time, 13.57 billion years ago. This means that this organism existed only 230 million years after the birth of the universe. The fact that the Webb Space Telescope indicates that the object is likely an early form of a star-filled galaxy.

In other words, in the 230 million years since the universe was born, several stars have formed and have formed clusters called galaxies. This evolutionary speed is a logical limitation on the state of the early universe and astrophysics, as are fluctuations in the amount and density of matter. 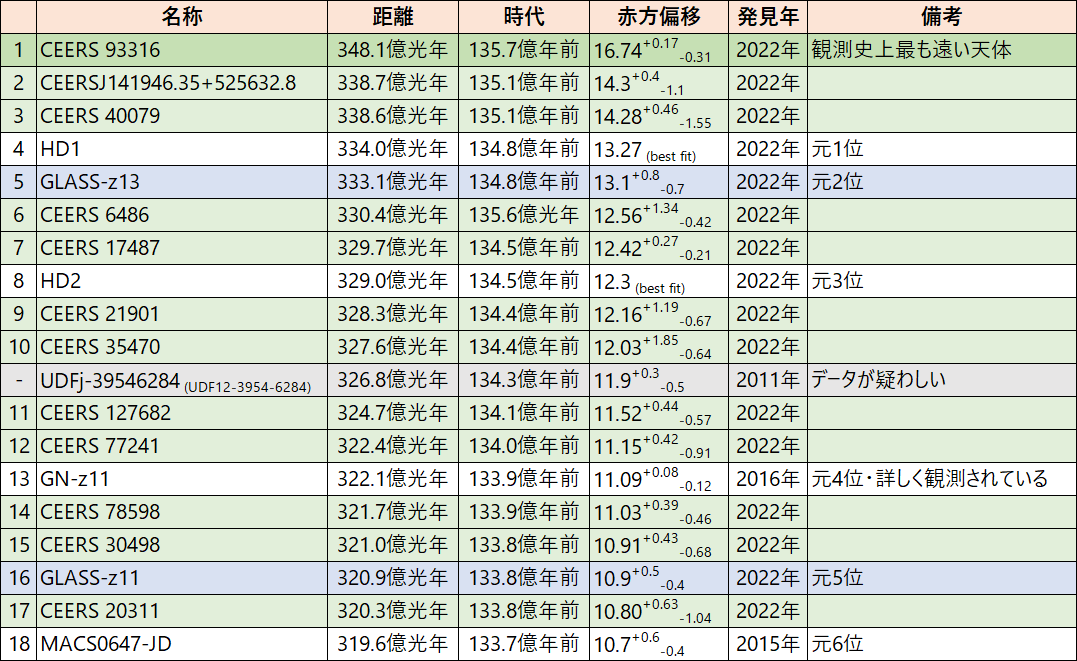 The next big point relates to the CEERS 93316 detected object. See the table above. Results associated with these two shaded layers are highlighted in green. And blue are the previously announced GLASS-z13 and GLASS-z11.

Shaded in green between 1st and 6th place in the traditional arrangement of distant objects (see column of notes)Many new things have been addedI think you can understand. The paper also includes the nineteenth and lowest celestial bodies that are not included in this table, and the ‘ranking of farthest orbs’ has been significantly updated.

Despite the fact that the observations in this paper are based on data from a small area (6.1 square minutes), less than one-twentieth of the apparent area of ​​the full moon (about 0.2 square degrees), this is a large amount of farther away. We were able to observe such a distant orb in such a short time and observing range, so by accumulating more observing data,Understanding the early universe is much fasterI will. 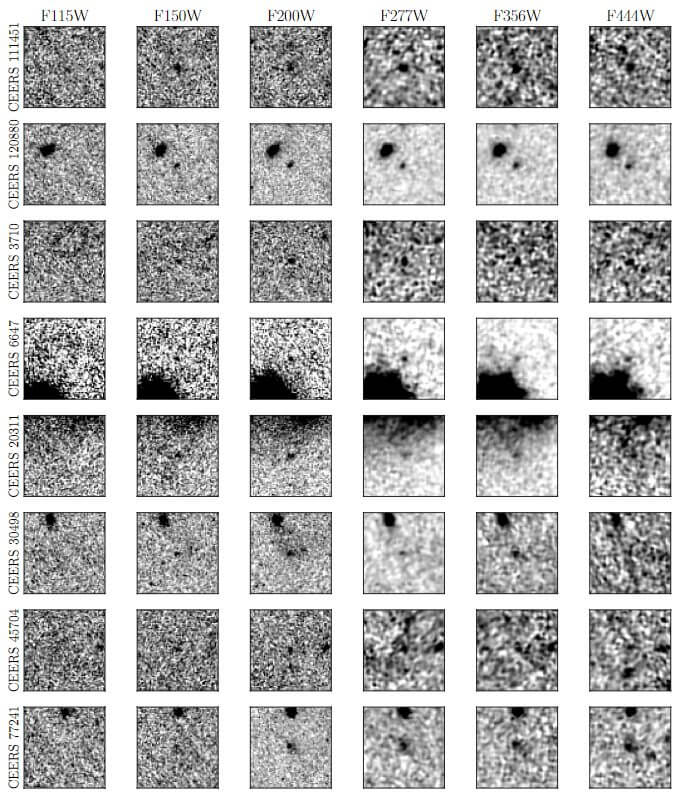 Even if we limit ourselves to these results, we can say that this is not the end of our research, but rather the beginning. Because the observational data this time is limited to a simple analysis, the uncertainty of the redshift, which is the basis for distance, remains significant. Also, due to its brightness, it is assumed to be the early shape of the galaxy, but if you want to be scientifically strict, it is more accurate to say that “the identity of CEERS 93316 is still unknown”.

In order to clarify the identity of the detected celestial body and investigate its properties clearly, it is necessary to measure the value of the redshift more accurately, determine the types and proportions of the elements by spectroscopy, estimate the mass and various numbers, such as diameter, must be revealed. for that purpose,It is hoped that the results of this observation will provide a foothold for further observations and research.This is a topic that I would like to continue to pay attention to.

See also  PlayStation Plus in March with ARK and Ghostrunner