Sun, beach and ice cream on hand. what do you want more? Now this summer is just around the corner, and it doesn’t seem like too far for you to try these things on your own again. But what do you do when it’s very cold outside or everyday situations make it difficult to get your foot in front of the door? very easy. You can simply bring your own beach walkway to your living room table! In Santa Monica, players have to create their own beach parks and use them to make the many tourists and locals happy alike. Do you have what it takes to be a tourism official?

SKELLIG GAMES made Santa Monica available for us to review.
This does not affect our rating!

This is what the game is all about

In SANTA MONICA, players have to create their own beach park, which they build on the basis of the starting tile. In each round, players have to pick a card from the open screen and place it in a position on a single beach promenade. In order to make the cards of some rows more attractive at the end of the game, there are two special characters to play under the screen, which gives the rows of cards they are placed under a small reward. If a row with one of these game pieces is selected, the piece moves in one position so that different rows of cards on the screen can take advantage of the reward. 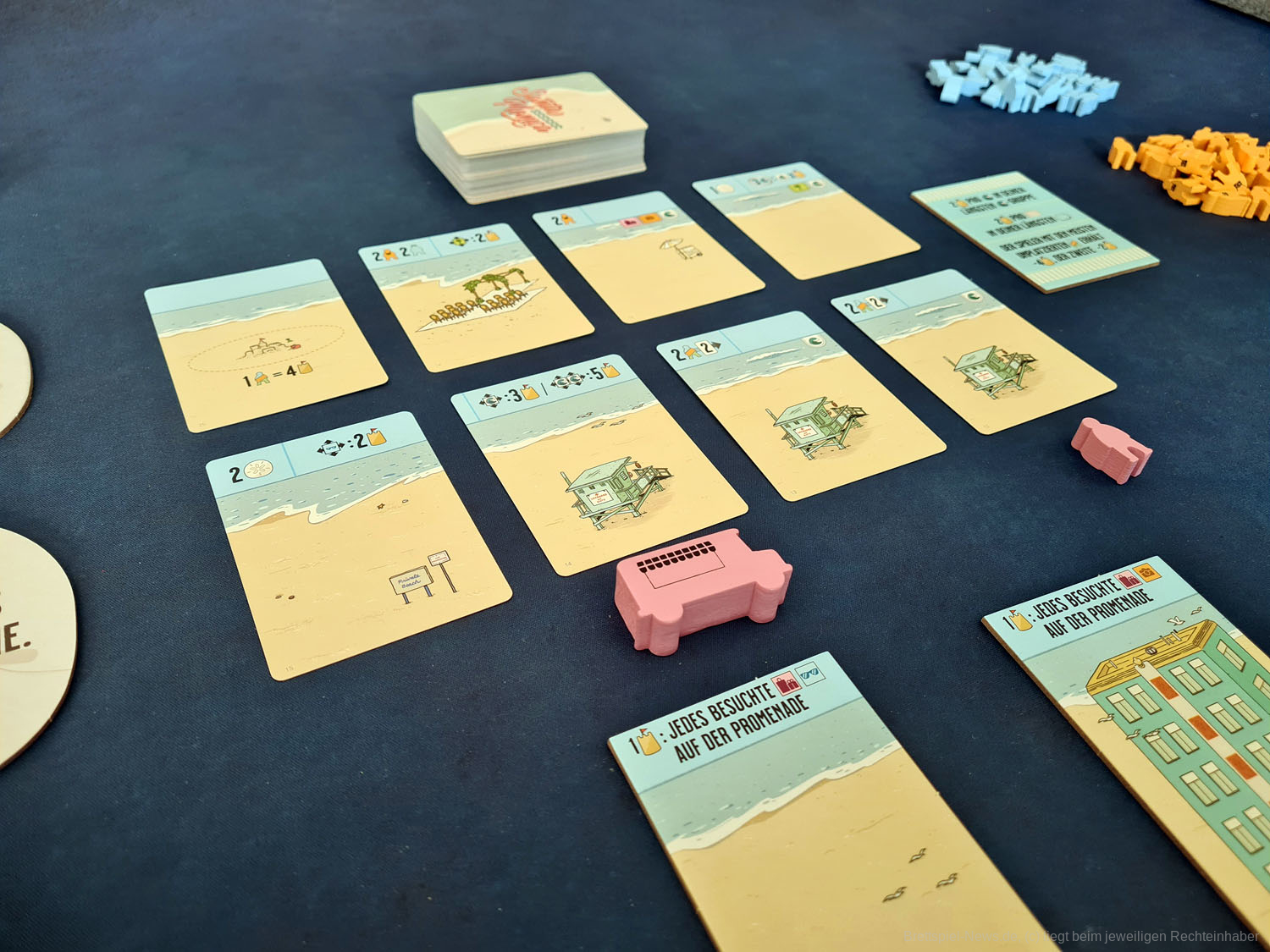 Cards fall into two categories: picnic and beach cards. These types of cards depict their regions in their names. Beach cards can only be placed in the beach area and picnic cards only in the picnic area.

Cards (as well as its card type) indicate all its functions in the form of symbols. At the top of the Beach Cards and below the Picnic Cards, players can find the card effects that they fire upon purchasing the card and / or during the final score. Effects that become relevant in the final scoring are the main source of income for SANTA MONICA Victory Points. In most cases, for these effects, players have to place cards from a certain deck or different combinations together in a coherent and continuous chain until the requirements for the card are met. For example, some cards require only two additional cards with a wave symbol in a chain, while others require a longer series of different symbols.

It is important that the chain of cards does not run in a straight line, but can mean freely across town as long as the cards are adjacent to at least one other card in the chain. Since each card has its own instructions, creating and collecting combos becomes a puzzle in which the endgame must not lose track of things. 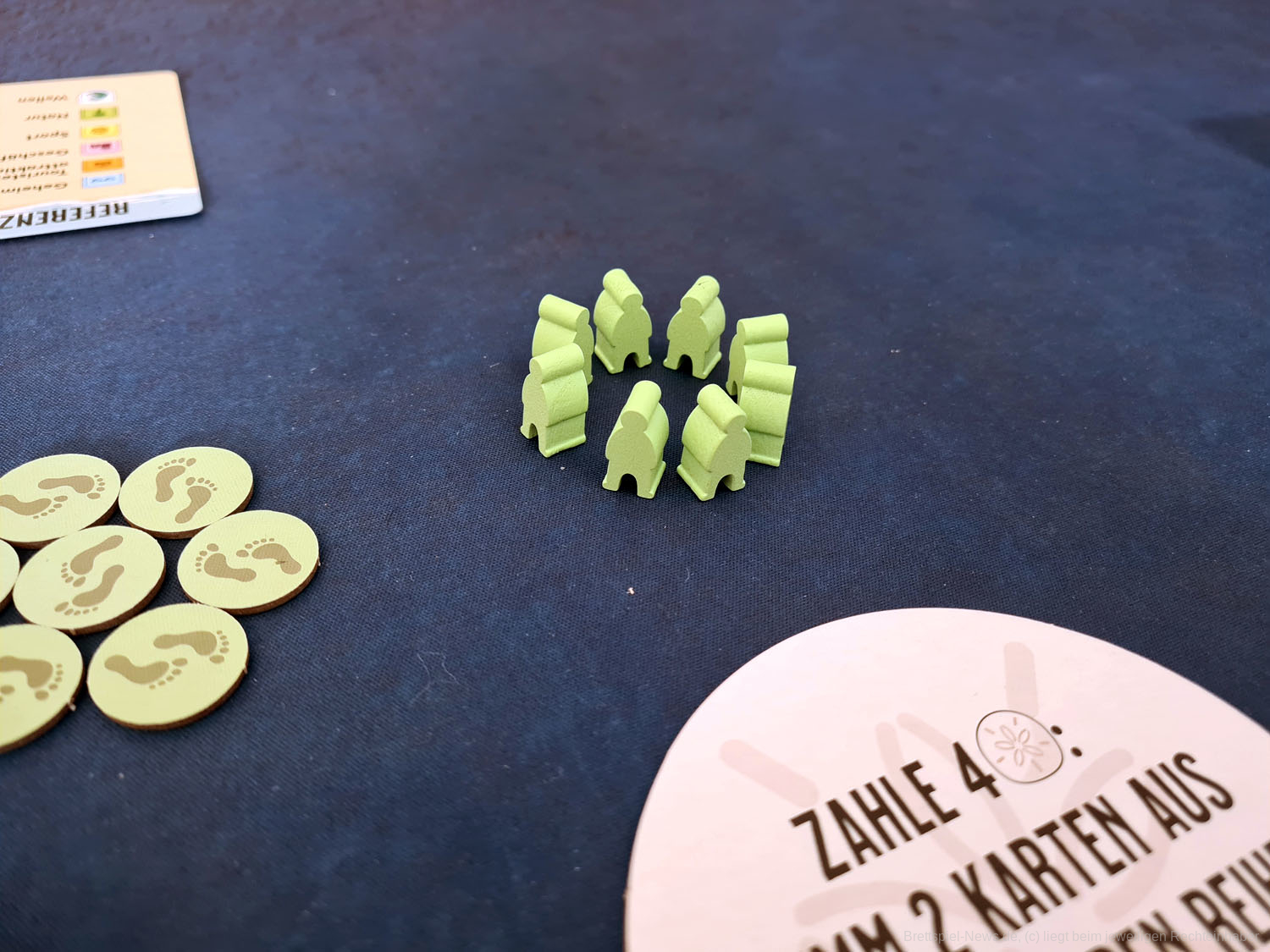 Another Victory Point generator is the Activity Circles on some cards on the Beach Corniche. These activity circles have to be filled with either tourists, locals, or VIPs (more on that in a moment) in order to get victory points printed and avoid negative points (more on that in a moment). Many circles of activity contain an accurate indication of how many residents should be in this, while others can be occupied indefinitely. 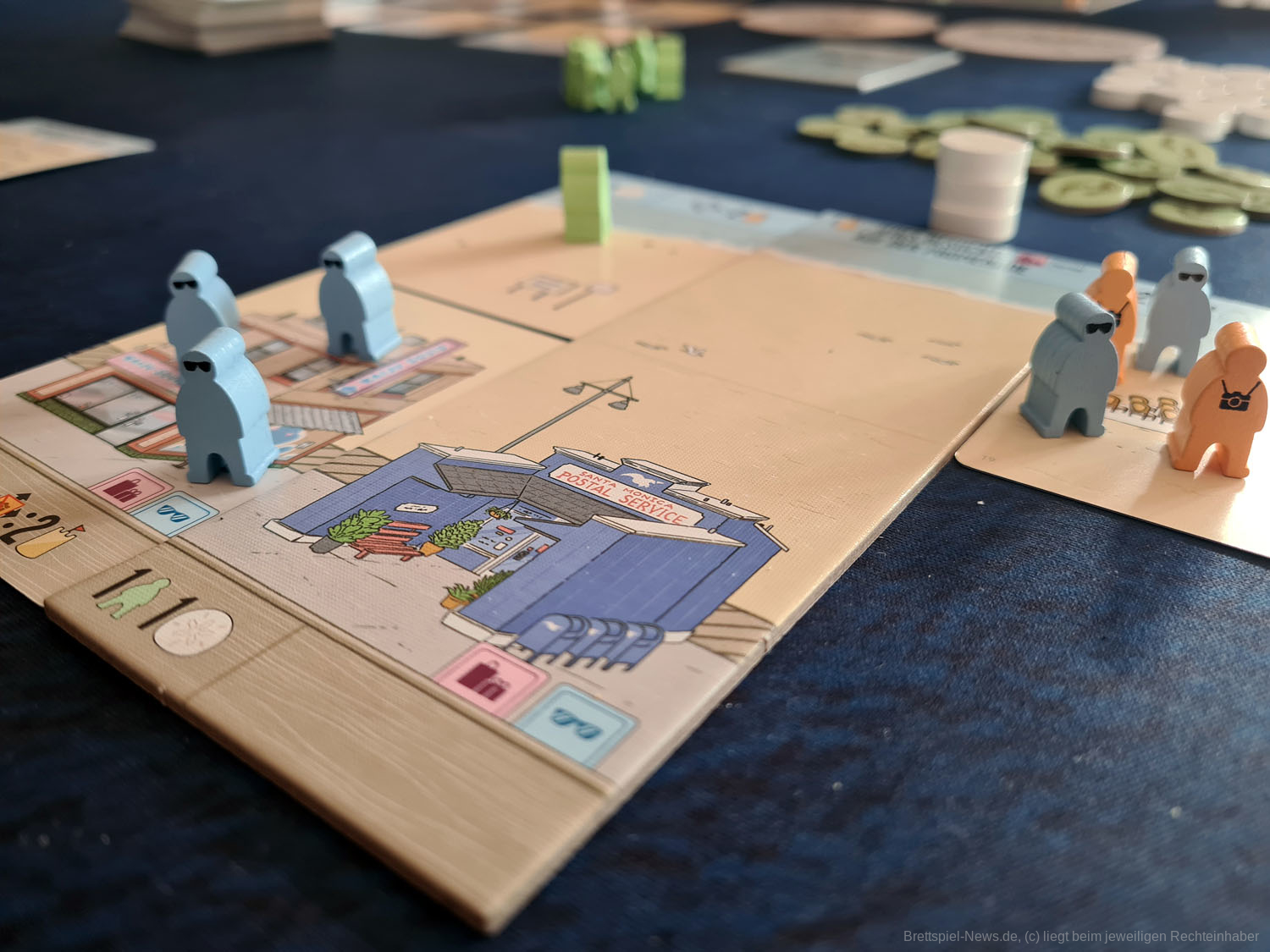 In addition to the screen, SANTA MONICA has workspaces that players can use to gain an advantage for themselves. In order to use these, “sand dollars” are spent, which players can obtain with their cards in order to secure other rewards in addition to the card received, depending on the ability to view. SANTA MONICA contains 4 double-sided squares, so each game can contain a random combination of 2 of 8 different skills. In addition to the skills that can be different in each game, one of three scorecards is also revealed at the start of the game, which applies equally to every player who finishes the game. These scoring cards indicate additional scoring paths and also contain information for receiving minus points for every park resident who is not in an Activity Circle.

The final score is reached as soon as the fourteenth card is placed on a park and every endgame has taken the final step. Now all victory points are scored on the scoring board and the winner is determined.

Santa Monica contains high quality game materials. The cardboard components are particularly thick and all myplate, tourists and locals, are supplied with prints of small sunglasses or miniature photo cameras. Even the Food Truck, which has only a small job in the game, has a solo edition. It should be noted that every symbol and maple in the game are made of printed and colored wood, which enhances the good impression. 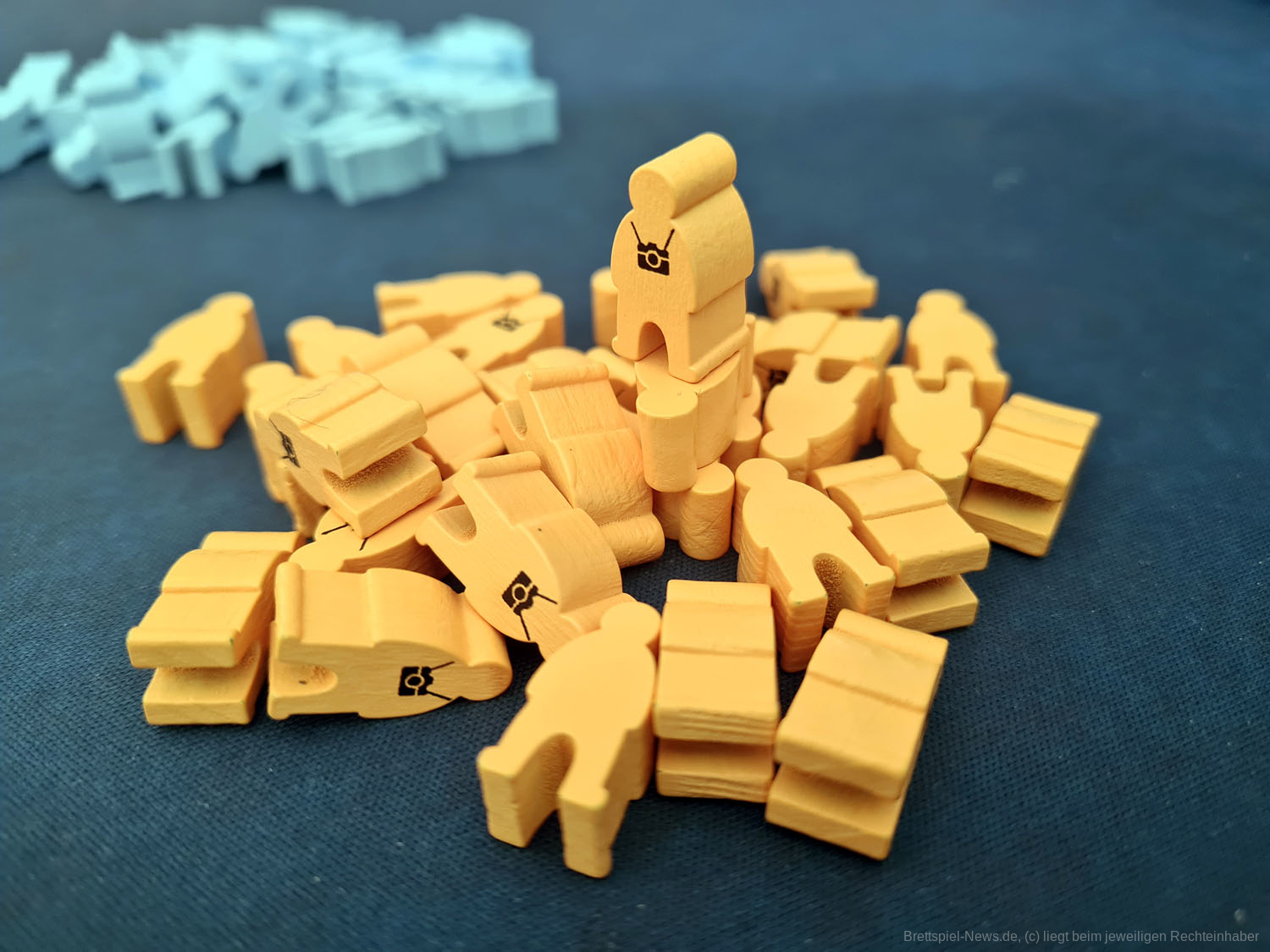 The design of the cards and the artwork goes well with the theme of the game and gives the game an interesting comedic look. The symbols on the cards are well chosen and can be quickly identified, with the player providing additional assistance. SANTA MONICA’s artwork offers so much variety that each of the 78 cards is individually designed, even if some of the cards show an empty stretch of beach.

The rule book explains the rules in total 12 pages. With numerous drawings and explanations of special rules relaxing a little rule book, SANTA MONICA offers a fast learning process, after which hardly any questions remain unanswered.