Submitted by Michael Tomiak on October 12 2021.

Arrakis is not a welcoming planet. The sun burns mercilessly on hot sand, and water is more precious than gold. In addition, the warlike House of Harkonnen has seized power on the planet and leads the people with power. But resistance to oppression is growing and you are part of this movement. It is up to you to bring down the mighty and create better conditions on the Arrakis. But in DUNE: SECRETS OF THE HOUSES, it’s not clear which house plays any role in the Mighty game, with all its intrigue and ropes. Your job is to smooth out the web of complexities and provide the resistance with the necessary information.

PEGASUS SPIELE kindly presented DUNE: Secret Houses available to us for free review.
This does not affect our rating!

Spices, water and the house of Harkonnen

DUNE: THE SECRET OF THE HOUSES is a cooperative storytelling game for one to four people, which is based on the mechanics of the successful DETECTIVE game and consists of an introduction and three chapters. The game begins after the events of Denis Villeneuve’s first DUNE movie and puts the group in the role of fighters in the resistance on the desert planet Arrakis. Information is collected through encounter cards and the Playdetective website, on the basis of any recommendations on how to proceed should be made at the end of each chapter. 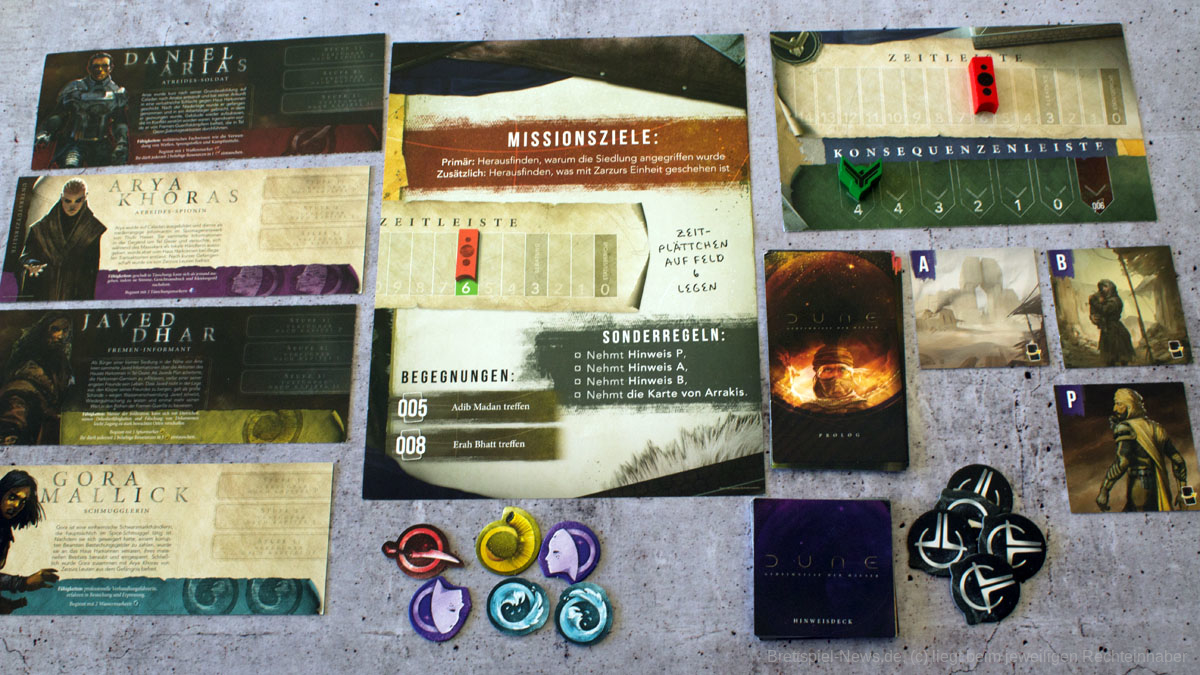 Four characters are available for the group to choose from. Each character has their own background that explains why they bring a certain type of resource (spices, water, weapons, or cheats) to play. The chosen characters have the ability to exchange any two personal resource sources. If the game is played with less than four people, the other characters participate in the game as supporters and give an additional starting source as an ability. Initial resources should be used wisely as there is no regular replenishment between seasons.

At the beginning of the class he is told how to make the start, what are the objectives of the current task and how much time is available. There are starting points available as a rendezvous at the beginning. For each meeting there is a card with a number. Once the group decides which encounter they find most useful for achieving goals, the time sign is moved to the right and the card is read. The information is revealed through the cards and sometimes other opportunities for encounters enter through them. Some cards can provide additional information or benefits if the deck is willing to spend resources on them or gamble with reward codes. There are three red and green score markers in the game that must be drawn upside down. If a green tick is drawn, nothing happens and the tag is set aside. If a red tick is drawn, the score mark is moved to the right and all squares are returned to the pool. 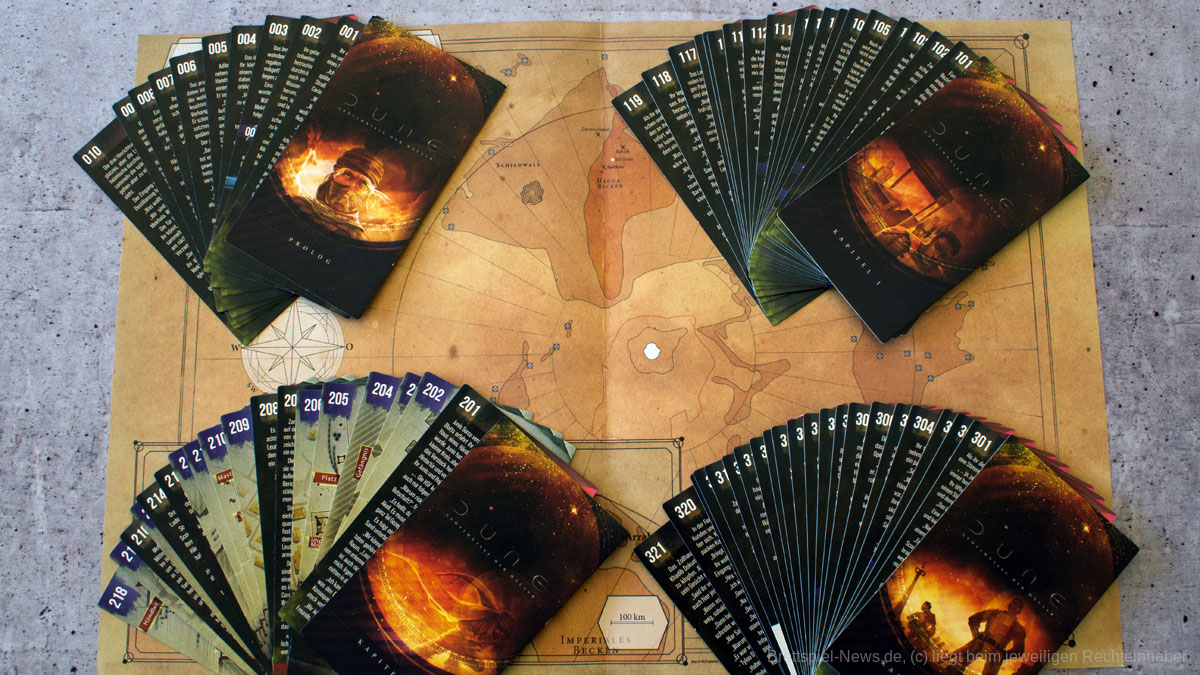 If the time mark reaches the right field without zero, the status report must be sent through the website after the encounter is resolved. This means giving a recommendation for action to the resistance on how to move forward. The story is then told based on that decision. After each task, the group has the opportunity to exchange new skills for the value of displaying points on the score bar, which provides new resources or benefits for future classes. In the last chapter, the score path was replaced by the victory point path.

See also  Get a podcast for MotoGP at Silverstone

The box is very well ventilated. Most of the space is taken up by a plastic insert that holds the small item in place. All materials can easily be placed in a third of the box. Encounter cards are sometimes printed closely, which can lead to reading difficulties for some people. There are also square hint cards that contain additional information. There are two cards made of thick paper, Time Path, Score and Victory made of sturdy cardboard, four Introductions to chapters made of cardstock and four character boards made of sturdy paper with a glossy effect. In addition to a row of cardboard signs, there are also two wooden symbols of consequences and time. 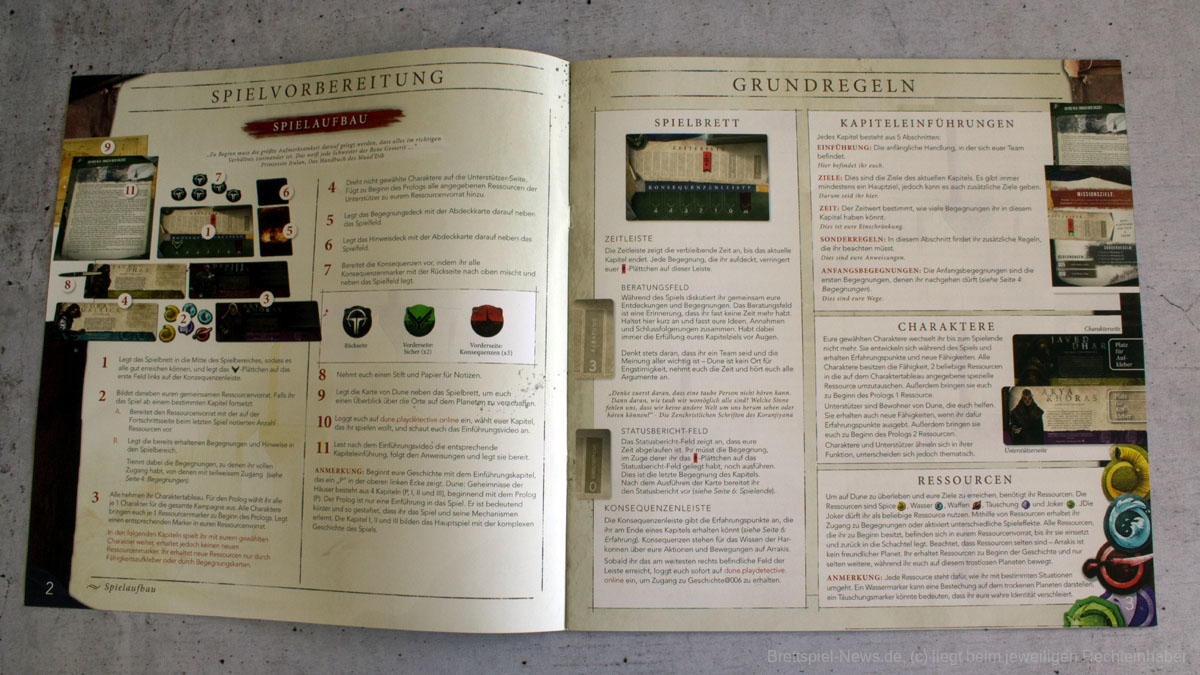 The instructions are not very comprehensive, but they explain all the basic points of the game well enough. Anyone familiar with the mechanics of the DETECTIVE series will hardly have any problems finding their way around. But even if you are new, you should be able to quickly familiarize yourself with the mechanics and get started after a short standard study. The introduction also takes the set by hand and provides a good introduction to the game mechanics.