Soundbar uses the Vertical Surround Engine and S-Force Pro Front to create virtual surround sound. The system can be expanded with speakers and rear speakers. 7.1.2 The soundbar has two up-ring speakers, two beam tweeters, five front speakers and an integrated dual speaker. This allows the tones to be emitted in different directions.

There is also compatibility with 360 reality audio and Dolby Vision via PassTrue. Built-in microphones should help you find the optimal location for the soundbar. Content can be transferred to the soundbar via WLAN and Bluetooth. HT-A7000 Chromecast, Spotify Connect and Apple AirPlay2. Control the device with Google Assistant and Alexa devices. In addition to a USB port and optical outputs and inputs, there are also HDMI ports and an S-Center Out connection. 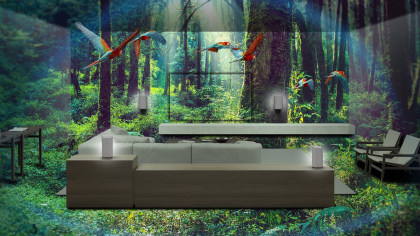 The HD-A9 home theater system uses Sony’s 360 spatial sound mapping technology to deliver “the most room-filling surround sound to date” according to the manufacturer. A sound field optimization determines the relative position of each loudspeaker and creates from the four physically present loudspeakers to the so-called Phantom loudspeakers. The loudspeakers are wirelessly connected to the control box. However, an electrical connection is still required for each speaker.

That too Sony HT-A9 Can be expanded through the loudspeaker. It is available in SA-SW3 with 200 watt output and SA-SW5 with 300 watt sound. Like the Soundbar, the home theater system supports Dolby Vision, Chromecast, Spotify Connect, Apple AirPlay 2, Google Assistant and Alexa.

The HT-A7000 soundbar costs 1300 euros, while the HT-A9 home theater system costs 1800 euros. Optional SA-SW3 speakers can be ordered for 500 euros or SA-SW3 for 800 euros. The wireless speaker SA-RS3S is also optional and is available for less than 500 euros. Delivery of the new devices is set to begin in September 2021.