The Belgium coach says, “Normally there are not such strong matches so soon.”

After the elimination of the Portuguese national team in the “round of 16” at Euro 2020, Belgium coach Roberto Martinez is preparing for the quarter-final match and does not doubt the difficulties that his team will face: “Italy will attack – we are from the first and second. I expect a very organized and dynamic team.”

Regarding the last match against Portugal, Martinez regrets the short break between matches. “The match against Portugal was supposed to be played later in the competition, usually there are not such strong matches so soon, but fortunately we had enough days to recover and prepare for the match,” he said. Another topic discussed during the match preview against Italy was the possible absence of Eden Hazard and Kevin De Bruyne due to injury. However, the Spanish coach did not help if he could count the players initially against the ‘squadra azzurra’. “We will make a decision in the last few minutes. So it is too early to take a position,” he said. 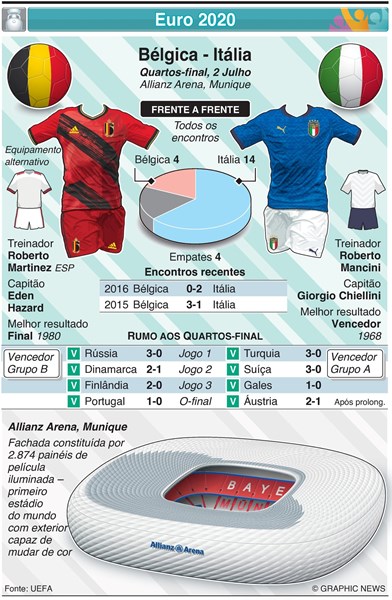 According to the record