At Computex 2022 in May, Corsair presented its first notebook, the Voyager a1600. Now bolide gaming and live streaming is coming to Germany. As Corsair told us up front, the 16-inch model was available in Germany for a few minutes at around €3,300 and €3,700 via the manufacturer’s online store and should also be available from regular retailers soon.

The Corsair Voyager a1600 offers either an AMD Ryzen 7 6800H or Ryzen 9 6900H with eight cores and 16 threads, each accompanied by a dedicated AMD Radeon RX 6800M video memory with 12GB of GDDR6 video memory. Combined with the 230W power supply, the AMD processor is configured in Balanced mode, which is activated by default, with a power target of 54W, only to be reduced to 45W after longer peak loads. On the other hand, the target power of the GPU is 120W.

In battery mode, the processor is at least reduced to 25W to save uptime. Corsair also offers a Quiet/Streaming mode that powers the CPU and GPU at 45W and 120W, respectively.

Depending on the model variant, there’s also 32 or 64GB of DDR5 RAM with 4800MHz, which of course comes from the Vengeance series onboard, and a fast PCI Express 4.0 SSD with 1 or 2TB of storage. The screen has a diagonal of 16 inches, has a native resolution of 2560 x 1600 pixels and achieves a fast refresh rate of 240 Hz. Additionally, the matte IPS panel is FreeSync Premium compatible and already factory calibrated, resulting in 100% sRGB color space coverage.

Another feature is the mechanical keyboard. This is where Cherry’s ultra-low keys come in, which are of course RGB backlit and were really able to convince us in our first test. The Marco bar is located at a slight angle just above the keyboard and below the screen between the hinges. For example, it can be used to start Corsair iCUE and start recording directly via OBS Studio, while switching cooling and hardware to silent mode at the same time. 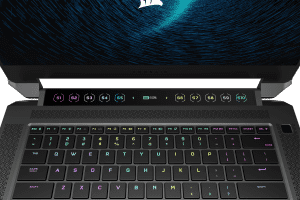 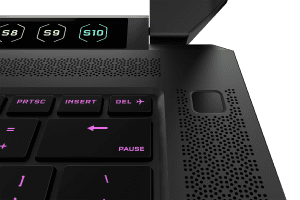 In the middle between the 10 S buttons, the macro bar also provides information about important system functions, such as battery status, CPU load, or time. These small gadgets can also be controlled via Corsair software. Elgato Stream Deck is also supported.

A Full HD 1080p 30 webcam and 4-way microphone array with ambient noise cancellation should improve your streaming experience even further. The webcam can be configured extensively via the Elgato Camera Hub. Brightness, contrast, sharpness, as well as white balance can be adjusted in this way. Built-in Dolby Atmos speakers ensure rich sound.

On the connectivity side, there are two USB 4 Type-C ports, a 3.5mm jack for connecting a headphone, as well as a power supply connector and a Kensington lock waiting to be used. On the right side are USB-A and -C as well as a full-size SD card reader. Wireless communication is via WiFi 6E and Bluetooth 5.2. An integrated fingerprint sensor and Corsair Slipstream technology complete the overall package.

Corsair packs all this into a case measuring just 356 x 286.7mm and 19.9mm with a total weight of 2.4kg. It is modern and sexy design with dark color. A 99W power storage unit is integrated into the on-the-go power supply.

The new Corsair Voyager a1600 is available in the basic version with Ryzen 7 from about 3,300 euros. With Ryzen 9 and dual memory expansion, a payment of approximately 3,700 euros is due. Soon a test sample is on its way to our editorial office.

BOTSI®-Advisor upgrades the Evolution Gaming Group from 327 to 284