Designing board games aimed at motivating playgroups to learn is a particular challenge. Not only do the authors set themselves the task of creating an engaging and exciting game, they also add the additional obstacle that the game conveys certain educational content in a way that is geared towards the target group. PRIME CLIMB is committed to teaching mathematics in a fun way. Through strategy and luck, playgroups should be able to spark their love for mathematics. Since this would really be the time for me as a mathematician, we dare to try for ourselves whether the PRIME CLIMB succeeds in this feat.

FUN thought of making the PRIME CLIMB available for us to review.
This does not affect our rating!

To win a PRIME CLIMB game, players must bring their pawns to the center of the field. The playing field consists of a spiral of numbers with numbers from 1 to 101, on which the playing group moves by rolling two dice from ten sides. In one move, two 10-sided dice are rolled and each is individually multiplied, divided, added or subtracted by the current number of the field on which the pawn is located. 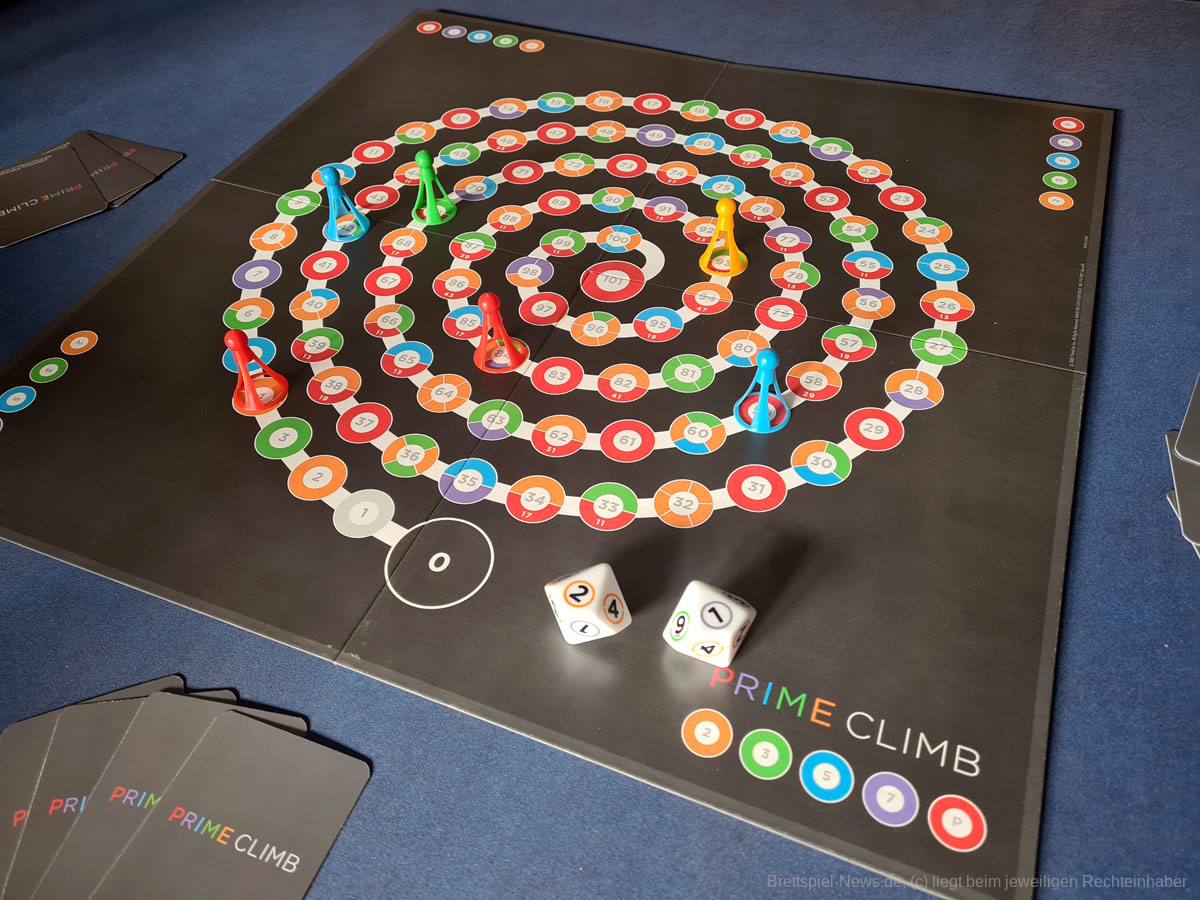 The choice is entirely up to the player, but the outcome of the two dice is always taken individually. For example, if Paul rolls a 9 and a 5 while on a field of 10, he must first take one of the two outcomes and multiply, divide, add or subtract by 10. Once that happens, the same action is applied to the outcome of the other dice on the new field before the The next game turn ends.

See also  Do you like garlic? A charming book about two old men ...

Whether Paul has calculated his score correctly, he can easily check the field colors and dice scores. Each field is divided into different colors on the edge. Colors are given only for multiplication or division, as they can be used as an additional aid to especially large numbers. In our example, Paul doubled his field number by the number 5 which he rolled to land on field 50. The number 5 on the die has a blue circle, and field 10 has a blue and orange semicircle. When multiplied, the blue circle is now added to the other colors, so that the number 50 consists of 2 blue and one orange part of the circle. This is similar to division, only here the colors of the cube are subtracted from the colors of the circle. In this way, the end of the game can check if it is correct during the game without interrupting the game flow. If a player enters a field that is already occupied during the game, the playing number there will be reset to 0 so that they have to start their path again.

The strategy of always hitting higher numbers together so that the number increases quickly does not hit the target with PRIME CLIMB. Players always have to think about the number with which they can best manage their way, so it may be advised to subtract the smaller number and then hit it on the second dice.

In order to win, the field with the number 101 must be reached exactly – the end of the game must land a point. So players are not allowed to make a calculation beyond the goal.

Last but not least, PRIME CLIMB provides a card mechanism intended to provide additional strategic options. If players enter a prime number field, they can draw a card and apply the effect to that card immediately or, depending on the type of card, take the card in hand.

The effects of these cards vary greatly, and the effects that must be played on the spot can be either positive or negative at the end of the game. Depending on their position, they can be moved forward or backward, steal one of the desired cards from their opponents or automatically move to the nearest occupied space in order to throw the pawn there again to 0.

As soon as one end of the game can move the two pieces to number 101, the game is over.

PRIME CLIMB contains a total of 24 cards, a deck, a large dice with ten sides and 8 playable characters in 4 colors. The materials are processed with the usual quality of a board game, so that there is really nothing to complain about or to stress particularly about. The cards and pieces fully fulfill their purpose, while the dice are kept large so that all players at the table can see the outcome of the dice. We found the stadium’s colorful design to be particularly successful, which also serves as a billing control body. Not only does the design serve a playful purpose, it’s also pretty good looking, with the strong colors coming on their own against the dark background.

See also  On the psychology of money 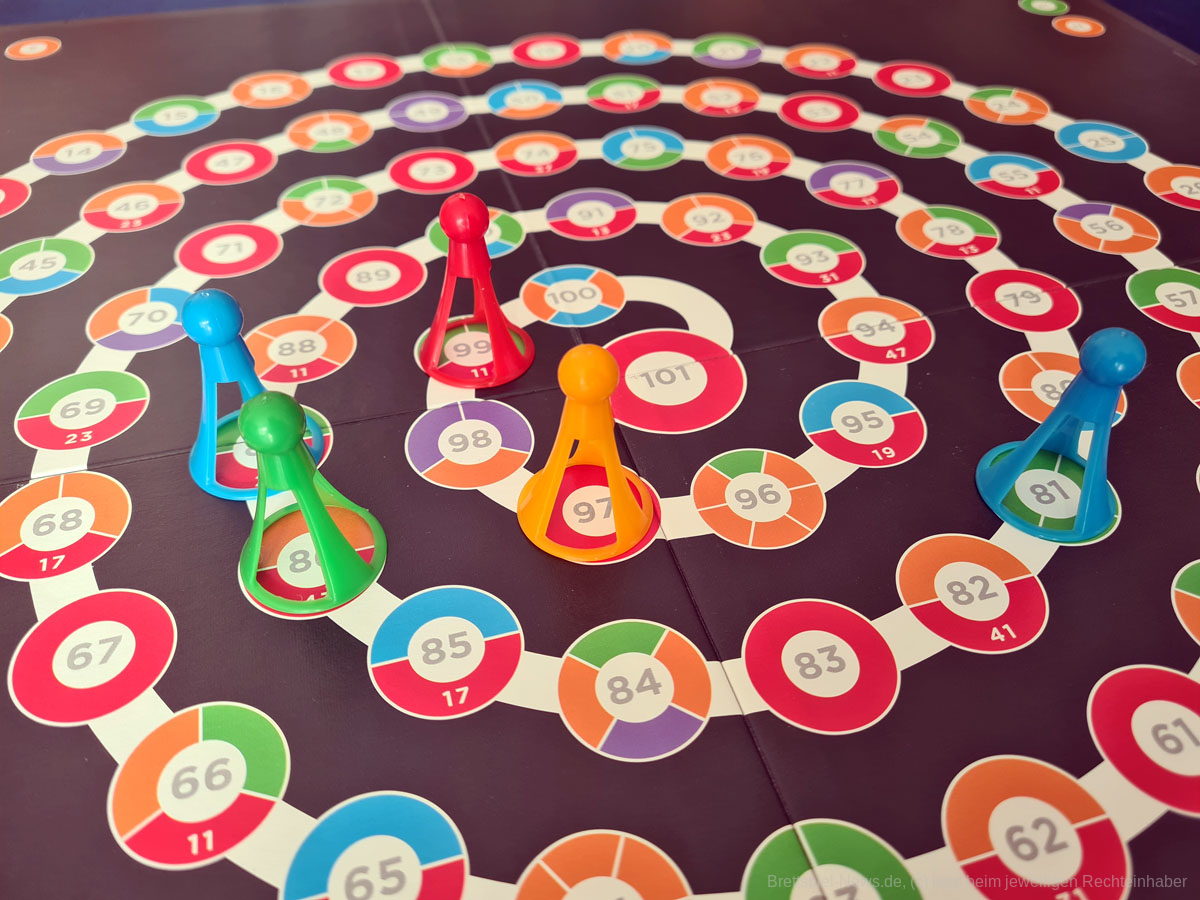 The rules of the game are written in several languages, and they are explained succinctly and succinctly in each language. With short and concise grammar texts, always backed up by well-designed graphics. In this way, even beginners are quickly introduced to the game.