Written by Sandra and Tobias Zimmermann on 25 July 2021.

At the GRAND AUSTRIA HOTEL 2-4, people find themselves in early 20th century Vienna and compete to make their own hotel the city’s most popular and well-known accommodation. To achieve this, employees must be hired, supplies purchased, hotel rooms equipped and guests are served. The following test shows how this can be achieved.

LOOKOUT GAMES has given the GRAND AUSTRIA a review.

This did not affect our rating!

At the start of the game, each person receives his own hotel plan, six staff cards face down, three of which must be disposed of, and a handful of starting resources (coffee, cake, wine, pancakes). The game runs over seven rounds, and each round consists of two moves per person. At the end of the third, fifth and seventh rounds, an emperor rating is carried out to check how well the respective hotels meet the requirements of the imperial court. If the Imperial Court is not given due attention, this not only costs points in the rating, but may also lead to special flaws in the further course of the game. The final scoring is also made at the end of the match. 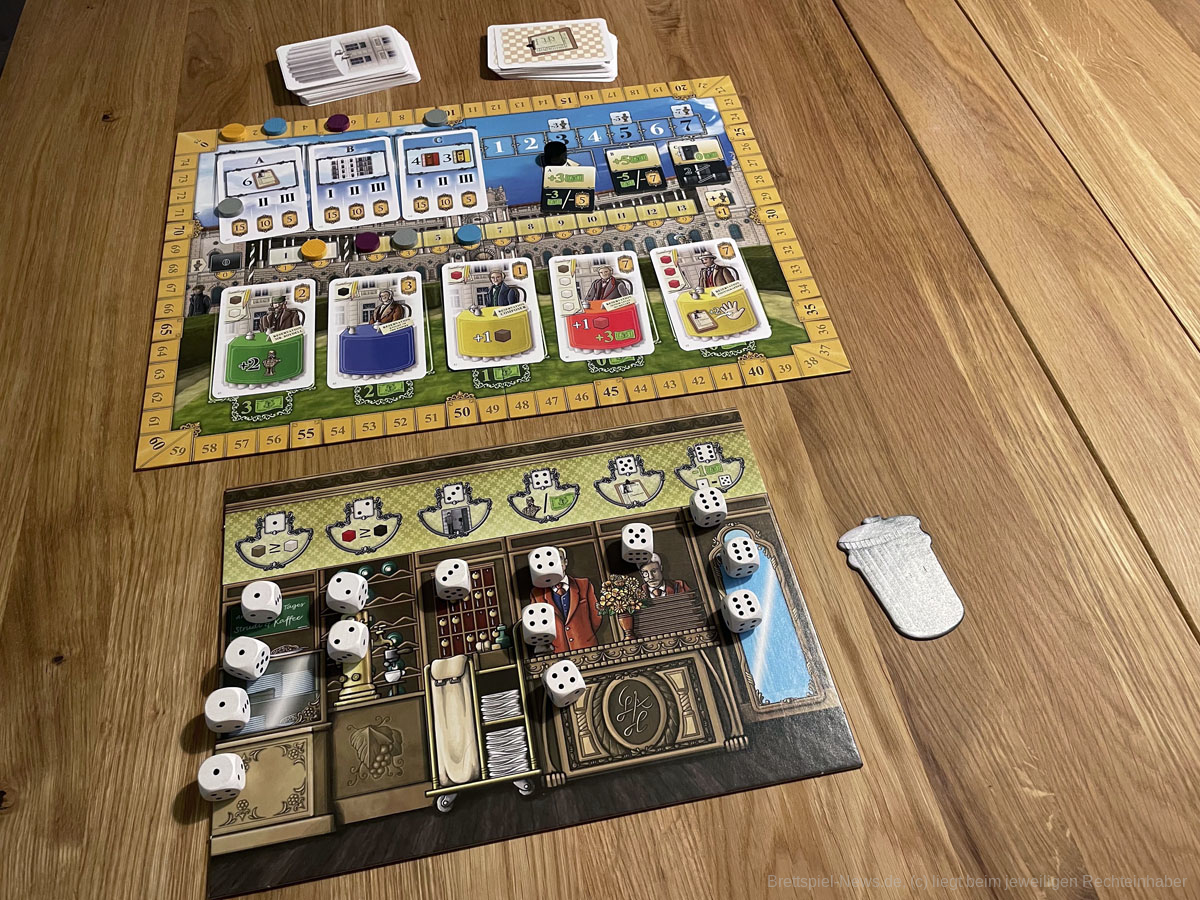 At the beginning of each game round, depending on the number of players, 10 to 14 dice are rolled and assigned to the movement spaces on the game board based on their number. At every turn, a guest can be placed from the guest screen in your cafe. The café can be understood as a showcase of unfinished business (unattended guests) and accommodates three seats.

Then you must choose or pass one of the six main actions. The strength of the action chosen depends on the number of dice available. The higher the number of dice on the action in question, the stronger the action. If an action is chosen, one of the dice is removed from the action, so subsequent actions of the same type become steadily weaker. Possible actions are two fields for acquiring resources, a field for setting up hotel rooms, a field for progressing on the Emperor’s path as well as a money return, a field for playing staff and a field for the Joker, with its help, in exchange for a coin payment, every other field can be activated with the Joker field dice. 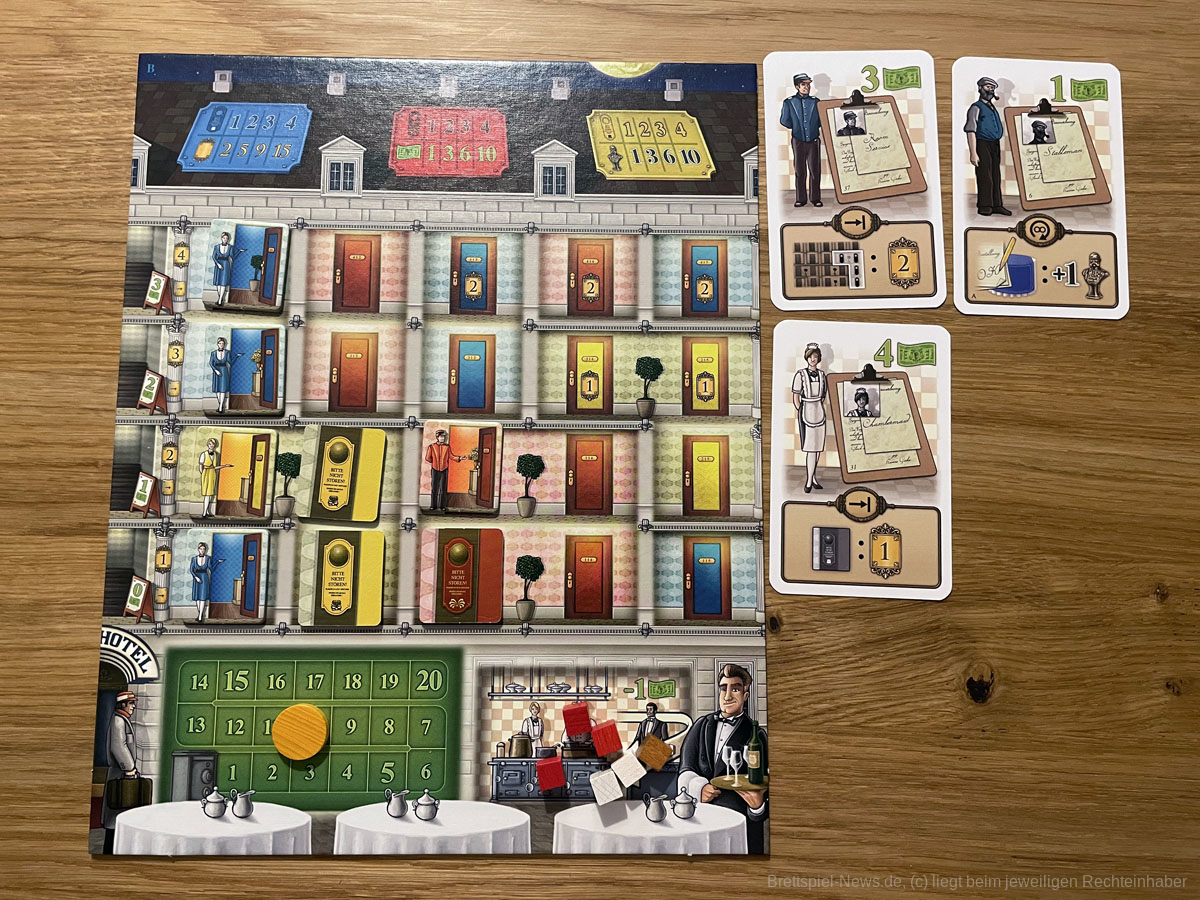 In addition to the above main actions, various side actions can also be performed. Among other things, it can serve guests, activate employees, and achieve reward goals. Additionally, the number of dice can be manipulated on a main action for a fee.

Particular attention is paid to the furnishing of hotel rooms, since the service can be provided to guests only if they have a hotel room of a matching color. Each hotel room can also accommodate one guest only. This is especially important, because this not only activates instant rewards for guests, but also collects winning points for the final registration. In particular, employees must help, who, after the play, supports with immediate rewards, additional side actions, and lasting effects.

Instead of performing a key action, it is also possible to scroll. Not only does this allow all the still-rolling dice to be recycled, but it also allows the omitted action to be configured later in the round. However, one of the existing dices must be deactivated before re-rolling. This cube is no longer available during the round.

After the end of the seventh round, the final scoring follows. The person who gets the most points wins.

The game materials can easily be accommodated in the box. LOOKOUT SPIELE has equipped the game chest with a total of 120 medium quality cards, 145 colored wooden cubes and wooden discs. Cards are designed individually. Sometimes the symbolism only raises questions in the first few games. The attached overview cards explain the available side actions and are very useful during the game. 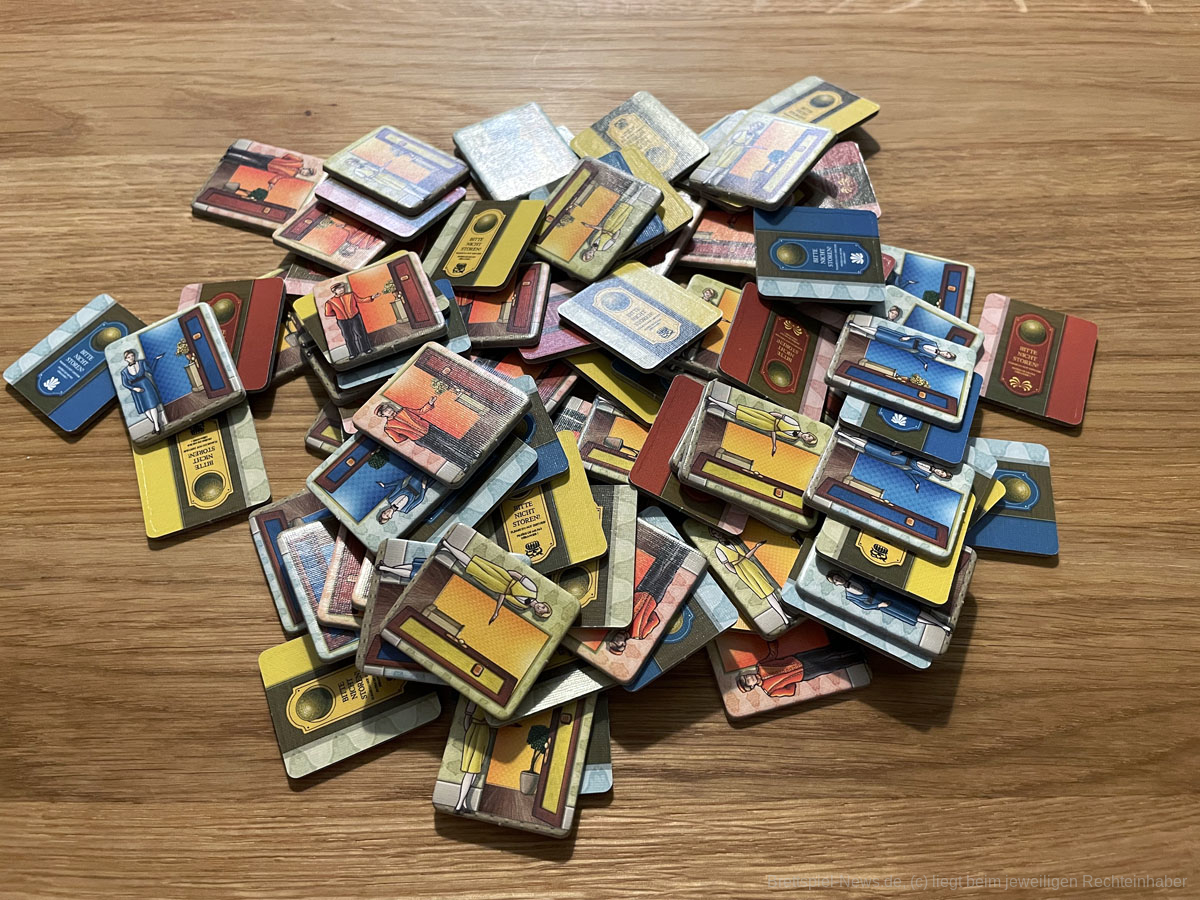 Strong cardboard was used for 84 tiles and 26 other tags. The 14 cubes included are standard white cubes. The general game plans and players hotel plans printed on both sides are well laid out and not too thin.

The game instructions in A4 format show the game in 16 pages with enough examples. Grammar questions don’t stay open here. In particular, the interpretation of all employee cards is positive.

“Time Dilation” – Our perception of time has slowed down

Hugh Jackman reveals that his beloved dog, Dali, died a month before his twelfth birthday