We’ve also received the second edition of the “Star Trek Universe Collection” in the meantime. In addition to our unboxing video, you can read all in the review here.

As always – and as you can see in our video – this model also comes with a small brochure. Unfortunately, as usual, only in English. As far as the basic information is concerned, this time it was also a bit weak.

Basic information in the universe is limited by the fact that the 2399 Investigation class is the newest class of ships in the fleet. And that’s it. That’s too bad, but you didn’t see much of the ship’s interior on display, let alone get more data on it.

As always, this is followed by background information about Zheng He’s design process. Unfortunately, this is also very meager. Designer John Ives had ideas for this class in 2006, which was still called (among other things) the Neptune class. In fact, the original designs (also shown here) are almost as close to the finished product. When Ives joined the “Picard” production team, he pulled the old designs out of the moth chest. Producers liked them, Ives gave the ship class the necessary refinement and the new ship class was ready.

We note that the content of the entire brochure is unfortunately a bit mediocre, which is why reading it is less interesting. But does the model make up for it?

USS Zheng He, as the ship is called in “Picard”, is the flagship of the investigation fleet. This fleet was famously derided by fans as the “Copy and Paste Fleet”. The investigation class was shown in the first season finale “Et in Arcadia Ego, Part 2”. The brochure also states that in fact no simple copy and paste was used. Instead, the stamens incisors and the color schemes of individual ships varied. From this interpretation everyone can now draw their own conclusions …

The model is beautiful and flat, which at first seems a bit strange. But that’s what it was like on screen. The model still has enough “depth” that it is not reminiscent of the indescribable class of Qoj, which appeared in the form of a flatfish. Typical forms of union can also be seen here. 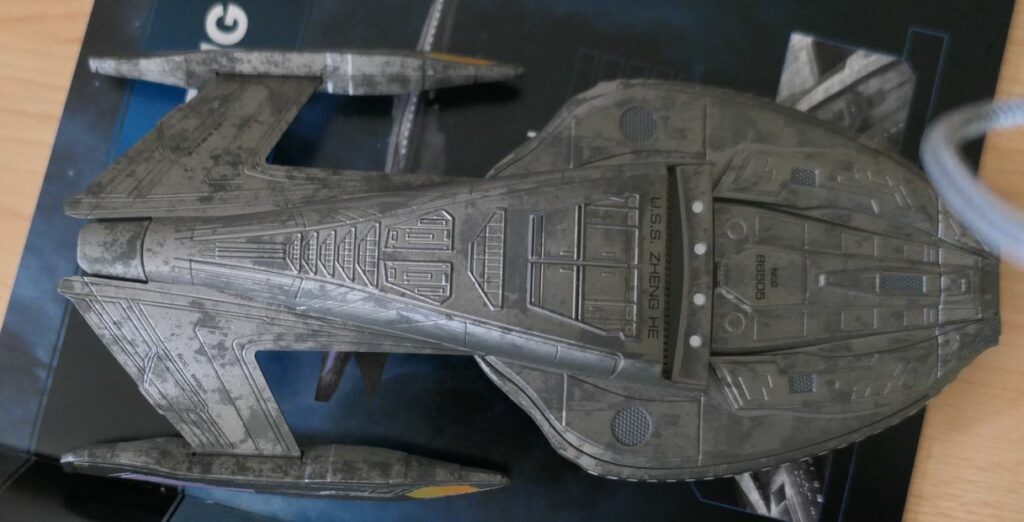 Underside of the USS Zheng He (Photo: Tom Götz, TZN)

Other than that, as is typical of Eaglemoss, they relied on the fine detail work that has characterized the models in the series throughout. The paint can be seen very well on the cover, there is even something like the port holes in a good old lattice, which nicely accentuates the underside.

The shuttle hangar can be seen on its back. Torsion cutters and thrusters have different colors, which are also well applied. Here, too, the mesh-like structures can be seen again. However, the gondolas themselves seem to be a bit more angular. The entire ship is kept in a slightly darker gray color. This supports the somewhat darker tone of the new series, but is slightly off the somewhat lighter gray of the other Starfleet ships. 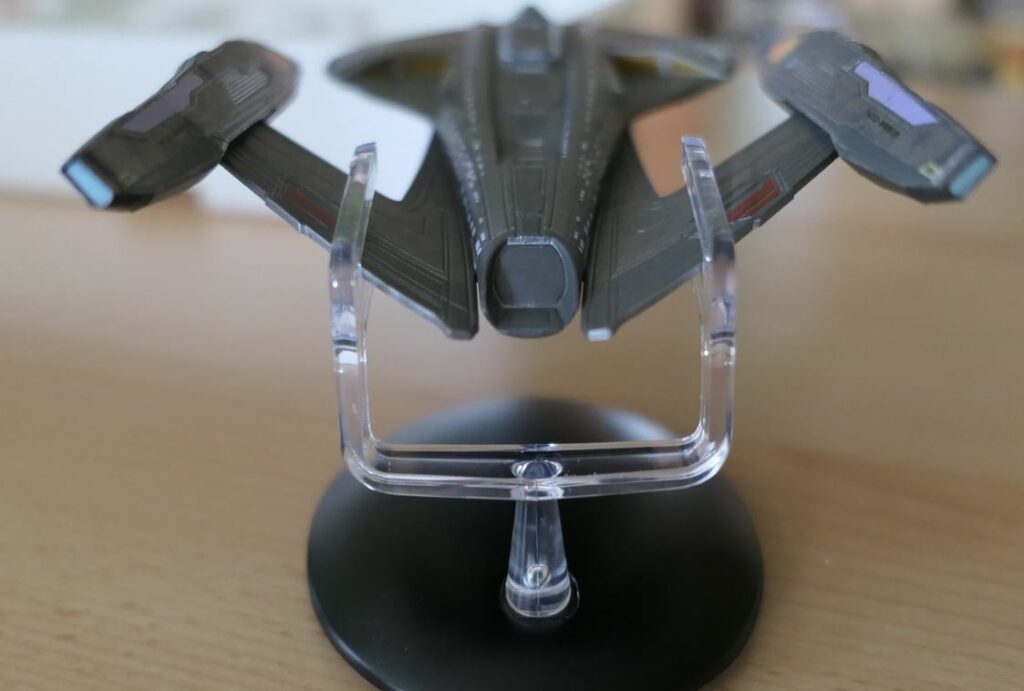 The rear of the USS Zheng He (Photo: Tom Götz, TZN)

On the plus side, the registration number and name are clearly legible on the top and bottom.

This form review wouldn’t be complete, if the “foot thing” wasn’t mentioned either. Because unfortunately the stand does not hold the model because it is very tall and very heavy (you can see more about this in the video). The stand is attached as instructed and the good ship ends. Maybe it’s just me and I’m just too stupid. But this is of course an obvious flaw that should not happen as such. (If someone has advice, please use the comment function!) 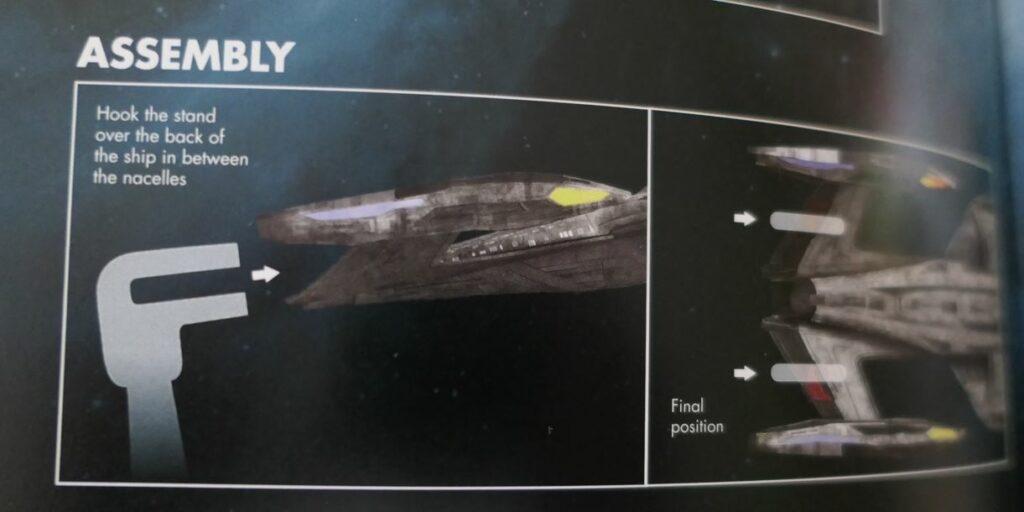 This is true, isn’t it? Here are assembly instructions for comparison. (Photo: Tom Götz, TZN)

Because you can’t really display the form with it or you have to put it in such a way that it always hits something and is kept. Eaglemus has seen better things.

The ship itself is not poorly executed and has the usual high level of detail. Unfortunately, the thin brochure and the fact that the form cannot be displayed have a negative impact on the rating.

Information: A copy of this edition has been given to the author by the publisher free of charge for the purpose of review.