The dwarves are back! Even in the new age, Aizenzeit, one or two industrious dwarves build their own caves. And this time it’s not just a shovel and a spade – no! Donkeys have given you a new opportunity to mine ore and turn it into iron and then turn it into weapons. A new era has begun. Which dwarves managed to expand their cave in the best possible way in these new times?

We bought CAVERNA – CAVE AGAINST CAVE – EPOCHE II – THE IRON AGE ourselves.
This does not affect our rating!

New caves for dwarves were built on caves that had been created earlier. Therefore, in CAVERNA – EPOCHE II – THE IRON TIME, every one or two games ends with the base game, the basic structure and raw materials for the base game. 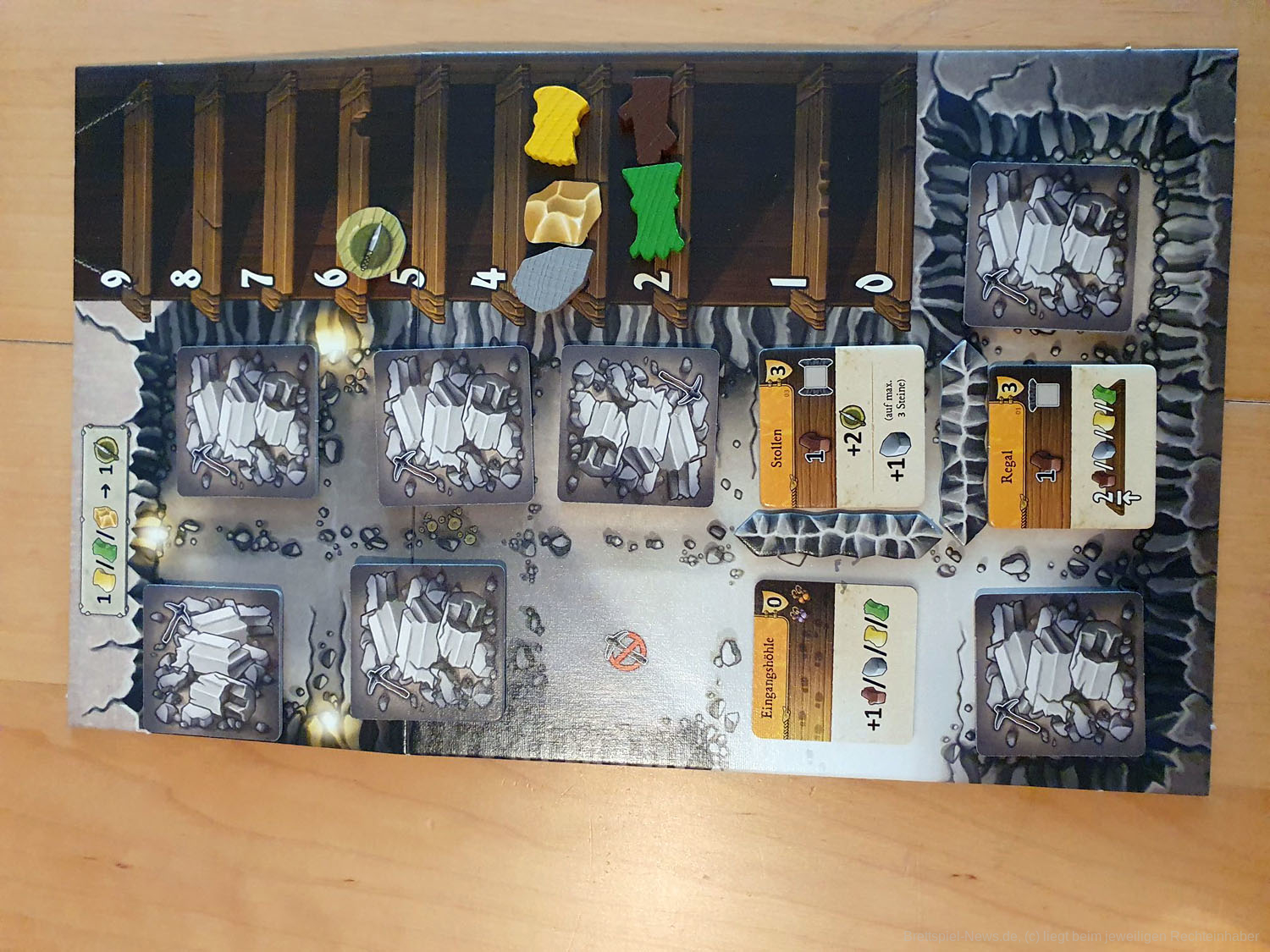 First, a full game is played according to the well-known rules that were already explained in the basic game review: players select tiles from the action plan and perform the actions described on them:

Through actions, players gradually hack into rooms on their cave map and build them with furniture tiles that generate victory points. The base game is played to the end. 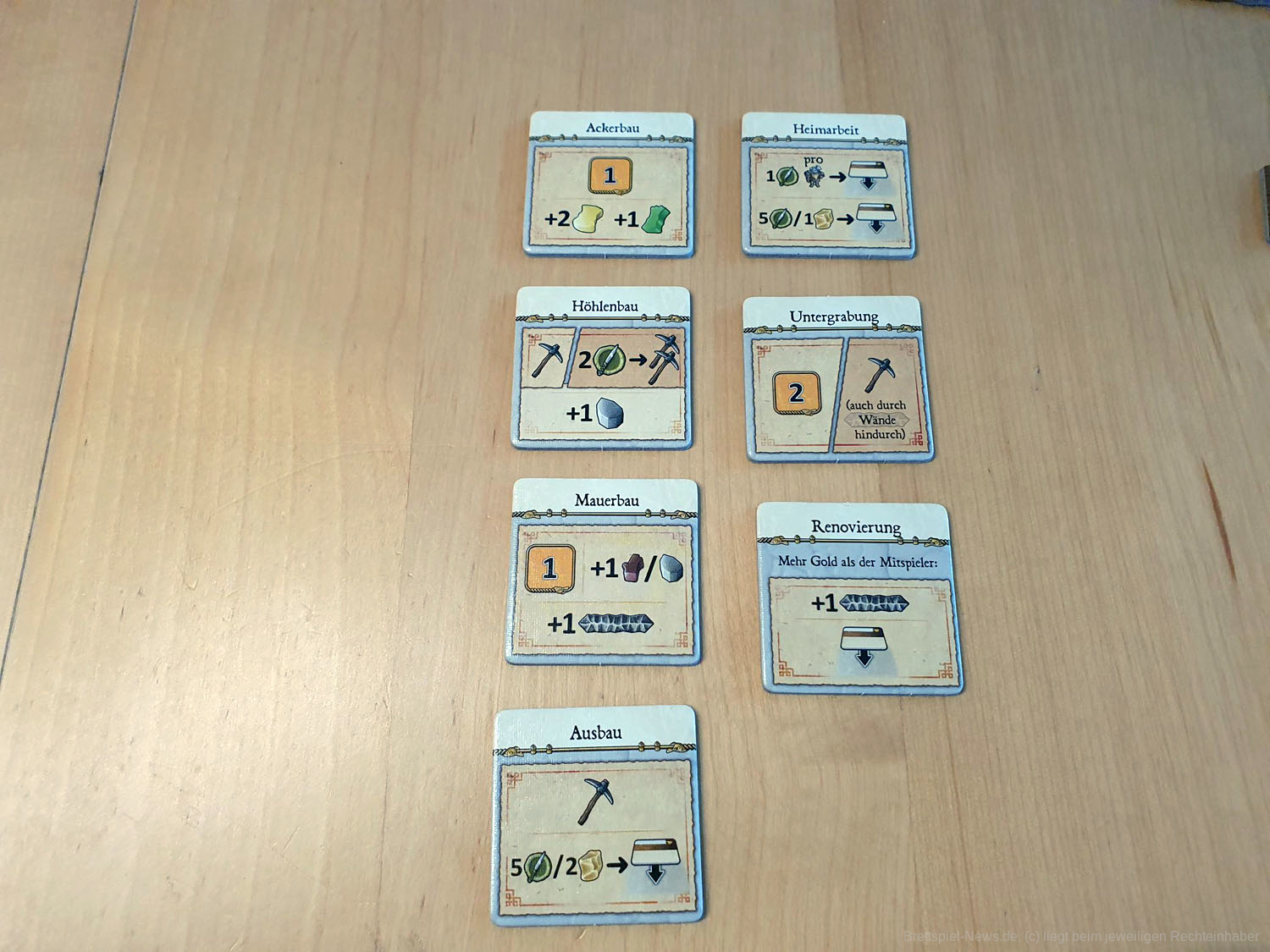 The construction of the caves is now completed, and EPOCHE II – IRON AGE begins:

After the last round of the base game, players add their winning points and write them down on the newly added points block. The game stays set, and players keep their raw materials and take them with them to the expansion round.

The game is then prepared for expansion: the new plan is attached to the action plan with four additional 4 tiles. Thus the game was extended by four rounds. 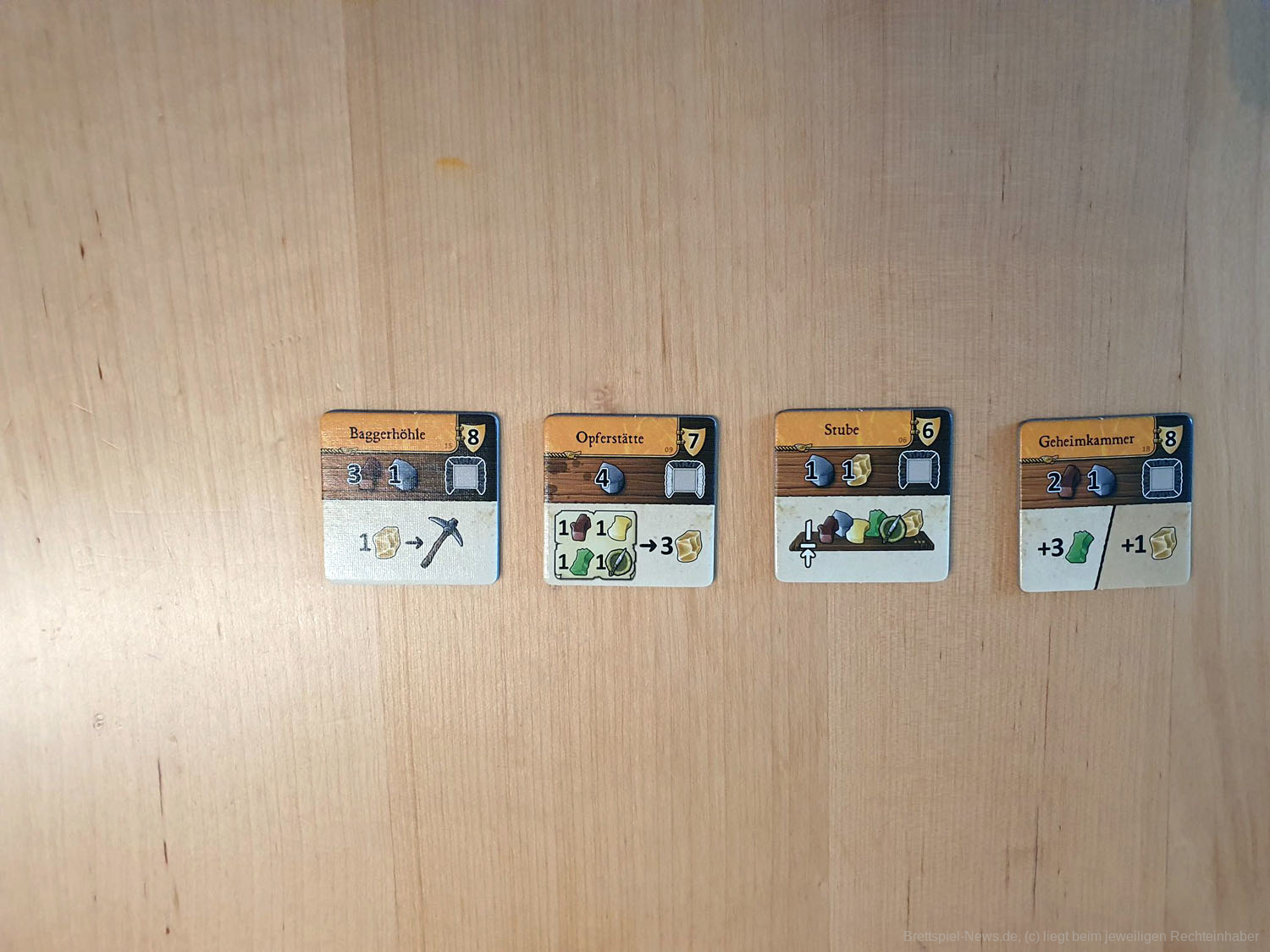 Players get an extension for their cave board as well as an extension that is placed on the resource path in order to store more resources there. In addition, all players start with four new additional raw materials: donkey, ore, iron and weapons.

The person who started the base game also begins to expand. The moves take place as in the main game. The only difference is that under the new four squares of the business plan, additional actions are opened with which new raw materials can be used.

The old and new cave plan can be built on in the expansion. If there are still undeveloped tiles or are not freely chipped on the cave board from the base game at the end of the game, they can still be built during the expansion game. 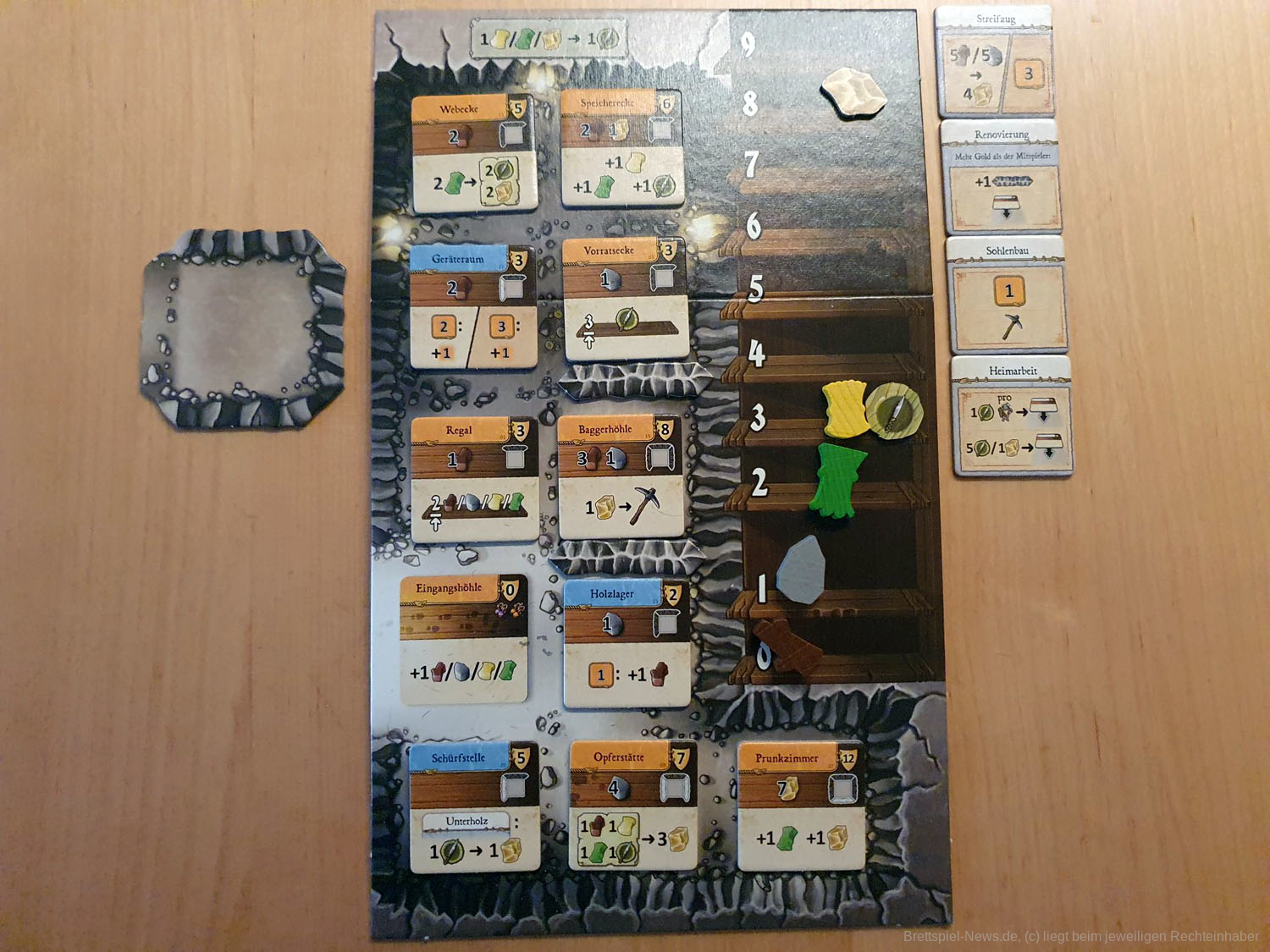 Who has the most beautiful cave in the Iron Age?

This is determined after the fourth round of new additional rounds. Points are scored on the cave map of the base game again. Points are also scored on the new cave map. In addition, there are points for weapons (one point each) and iron and gold (half a point each) in the expansion. Thus half of the victory points can also be generated.

These points are also written down on the point block and added to the base game score. The person who gets the most points wins the game.

As in the base game, the new cave layouts are made of sturdy cardboard. The new additional raw materials are also made of cardboard – except for the donkey. These are gray and made of wood. The materials are high quality and beautifully colored. The symbolism is clear. There is only one place where the icons have changed compared to the base game, but it is explained aptly in the instructable before that raises questions. 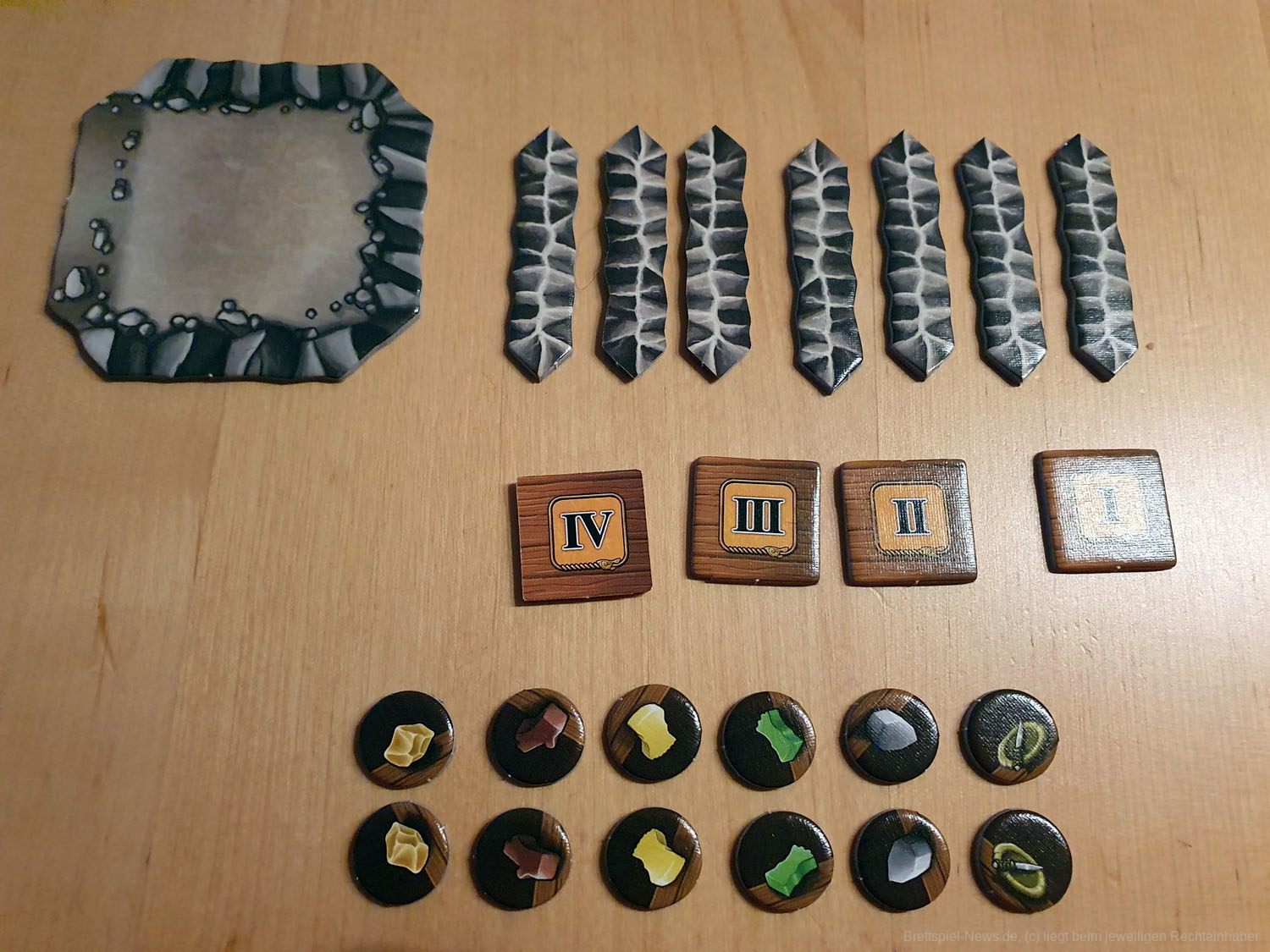