VESA, which is also behind the DisplayHDR initiative, has now launched a new certification process: ClearMR. This time it’s all about capturing the intensity of the action. One wants to endorse LCD and OLED panels for televisions and monitors, but also the displays built into laptops, tablets, and all-in-one computers. The goal is to give the consumer a quick overview of how to view the intensity of traffic.

Clear MR is intended to indicate the percentage of pixels that are blurred or blurred during fast movements. In addition, clear relationships between blurred and sharp pixels are shown. CMR is designed to replace the Motion Picture Response Time (MPRT) standard, which VESA rejects as too inaccurate. Accordingly, MPRT will not take into account image enhancement techniques, which formally increase sharpness but can reduce image quality – due to artifacts and distortions. 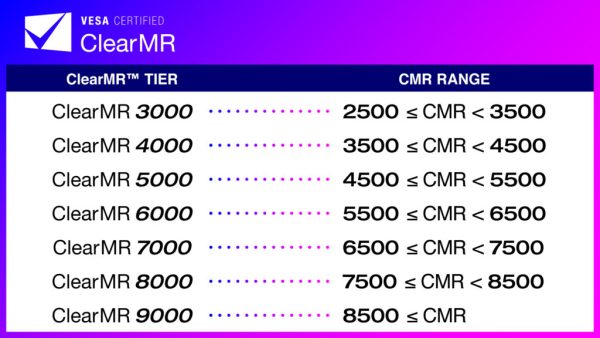 There are different quality levels – from ClearMR 3000 to ClearMR 9000. The values ​​are explained as follows: With ClearMR 7000 z. For example, there are 65 to 75 times more pixels in focus than out of focus (6500 to 7500%). So the higher the rating, the better the sharpness of the movement. In our opinion, VESA has not given enough thought to whether this might not be too complex and abstract for customers. We assume that ordinary people can hardly imagine what values ​​are.

However, manufacturers will soon be happy to announce with ClearMR. Anyway, Samsung Display has already announced this for QD OLED panels. LG Electronics would like to have its UltraGear gaming monitors certified, specifically the 48GQ900, 32GQ850 and 27GP850. However, there are still limitations to the tests: VESA admits that it only tests SDR operation. However, work is already underway to expand the accreditation program to include HDR tests.

BOTSI®-Advisor upgrades the Evolution Gaming Group from 327 to 284