Elias, Lilia, Nora, Qassem, and Sherine are the heirs of the greatest traveler from One Thousand and One Nights. They are the sons and at the same time the heirs of the adventurer Sinbad. The five have made it their mission to visit all the islands from Tales of 1001 Nights and recover their father’s greatest treasure. This is exactly what the children’s game “Islands from 1001 Nights” by Antoine Bauza and Bruno Catala (yikes!) is about finding beautiful treasures, but at the same time being careful of thieves.

How to play in Kids Game Islands from 1001 Nights

The game is up to five people. It should be noted that if the number of participants is less, the squares of the game will be reduced. No matter the number of players, the game always lasts 16 rounds. The match is expected to last about 30 minutes. This fits almost as well, as long as everyone knows the rules of the game and no further explanation is required.

Each player receives a character board on which the 4 dream cards and 12 islands are placed. Island tiles and dream cards are placed in 4 upside-down piles on the table. The four dream squares that each player collects during the game determine the points of the different items on the island (animals, gems and genies). It’s good to make sure that the dream tiles match the island tiles, because only then does the player get points at the end. There are always many treasures on the tiles, such as palm trees, gems or elephants.

The explorer, who may only pick and flip squares from a pile in this round, is selected. Likewise, he can choose the first piece for himself and then name a player who may take the second piece. Whoever gets the last tile is later in the next round. The dream tiles or island were laid out in a specific order.

Treasures can only be found…

In addition to tiles that bring points, there are also tiles that no one wants to have. On these, magic lamps or thieves were depicted. Magic lamps are only favorable if the player receives a third magic lamp, because then the player must flip the tiles of the first two magic lamps and thus lose points for the other symbols depicted. Next to the magic lamp, the thief is not very popular. It will be necessary not to get a thief, this is unfavorable only at the end of the game. The player with the most thieves gets one point deducted from the final score for each thief. If several players have the largest number of thieves, then all these players lose the corresponding points.

Whoever collected the most points, collected the most dreamy islands from the stories of Sinbad and found the greatest treasures, wins the game. In the event of a tie between two or more players, the player who has the least number of thieves on his island wins. If it’s like hell and there’s a tie here as well, then all the tied players win.

If the game is played by only two people, almost nothing will change. Only the scout selects 3 tiles. He may look at these and put one away without seeing the other beforehand. The other two tiles are exposed on the table. The other player can choose and place one of the three tiles. Only then can the scout take a tile and place it. The rest of the gameplay is identical.

What is promoted during the game?

The game is a children’s game, but for older children. The minimum age is seven years. Given that a seven-year-old’s ability to focus is still less than 30 minutes, this game is a challenge for the age group. The following are funded:

My conclusion and recommendation for baby play islands from 1001 Nights 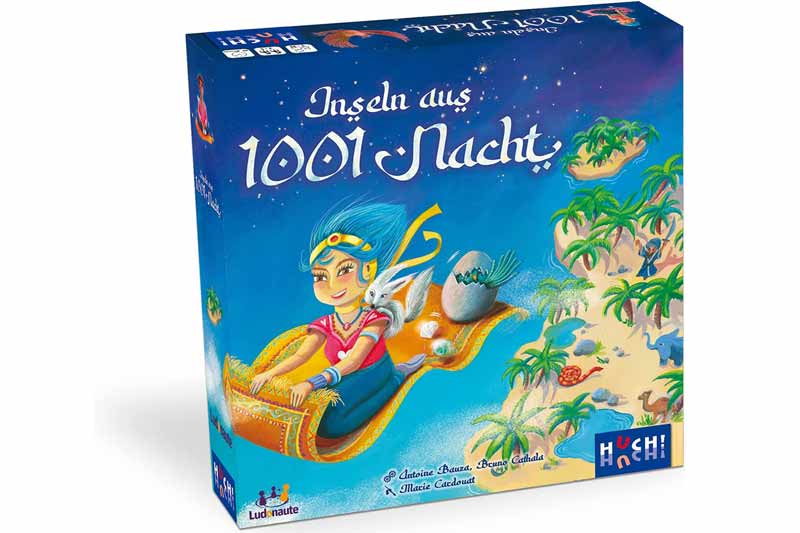 The game looks very straightforward. Each individual island card can be easily customized to see if it belongs to the top, middle, or bottom half of the island. The playing cards are very stable and can withstand a few playing times. I wanted to associate the character panels with the names of Sinbad’s children.

Due to the long playing time, the game is not suitable for therapeutic purposes. Also in the context of childcare like. In an elementary school that is open all day, I can hardly imagine islands of 1001 nights. The game has little movement and lasts a long time. Children quickly lose interest and perseverance.

The idea of ​​the game is good, but 16 rounds is too long. For this reason, it is difficult for me to recommend the game.