Fringers! The subject of fingers is clearly the topic of the day. The only question is: do you master your fingers with your little finger as you walk, do you need skill or dexterity or are your fingers fast enough? I am trying to get to the heart of these questions and report back on my experience with Fringers. The Asger Harding Granerud & Daniel Skjold Pedersen comes from Abacusspiele. It can be played with three or more players, but it should not be more than ten. Instructions for use are short and sweet and the contents of the relatively small package are easy to understand. It really shows that Fringers is not a complicated game. At Fringers, it’s all about time pressure, collaboration, talking to each other, fingers and rings. That’s it. But is it fun and how does it work? about it now.

In Fringers, the game is played cooperatively. This means that we all win or we all lose. I’m a huge fan of games like this and so I was doubly excited to test a new co-op game.

Already after the first lap I can say the Fringers is “tension”. However, this type of positive stress is addictive.

The feeling of “I want to beat the match” comes on quickly. I know feeling so good the mind. Otherwise, there is not much in common between the two games. in a the mind It’s all about syncing, and at some point you’ll understand a little bit how it goes. On the other hand, Fringers comes with three difficulty levels and different game variants around the corner. In other words: as you slowly begin to master the game, you can modify it. However, it seems that creative minds definitely have a chance to implement their game ideas. Two matches here can’t be compared either, as I said, they have very little in common, but I have the absolute will to defeat both.

But how does it work at Fringers?

There are these variables and difficulty levels. Personally, I love these customization options. Under the Fringers chest, lie an hourglass, 61 rings (10 each of red, yellow, turquoise, purple, black, white and a shiny ring), 40 goal cards (10 green, 15 yellow, 15 red), a cloth bag and two instructions (English and German). It can basically be managed.

It is recommended to use the simple variable to get to know each other, here only green cards are shuffled and laid down. Now players put five rings into the beanbag (all colors except white) and then each end of the game can take turns drawing the rings, at least three and five, and placing them in their right hand. Important, in the end all the rings should be on the right hand, no ring may be left in the bag, and it does not matter who has the number of rings and how they are distributed on the fingers. Now a white ring is placed next to the hourglass for each player. Preparation is over!

When everyone is ready, the target card is flipped. It always shows a matching hand and distribution of the different colored rings. In the end, this is what everyone’s right hands should look like. Once the target card is flipped, the hourglass is flipped over and placed in the first white ring. It should not expire at any time, or else the round is lost instantly. In order to do justice to the target card, all players must now pass the rings on their right hand to their companion sitting on the left. The rings are placed on the opponent’s fingers. Your rings may only be swiped and not repositioned yourself. As if this were not enough, no color may be applied twice on the fingers of the left partner and only the upper rings of your hand may be used.

Let this melt in your mouth: they all have the same destination card, and therefore know what their left partner needs. At the same time, everyone is also interested in not failing because of them. Then there was something else about the hourglass? That’s right, this should never pass, but anyone can trigger it at any time by putting it in the next white loop. This occurs when no more white rings are available. This is already clear to everyone. So you sit like that, watching your time and shouting out loud which color of the ring you need, while trying to make the people sitting next to you happy and hoping they won’t get in the way of anything. Admittedly, all of this is still possible with green cards, but that’s exactly where the differences and difficulty levels come into play.

Conclusion: Are Fringers Worth It?

Fringers are fast and excitingly fun. It is one of those games that stick together and are entertaining. If things go too bad, the cycle can end after 30 seconds. However, you are quickly moved to keep playing until you get it done. Then come the differences. If you have done this with a green card, there is a suggestion to play ten green cards in a row. If you lose one lap, you lose. If you can do this ten times, everyone wins.

The bling-bling variant also brings a new component, here there is a loop that allows it to be dispensed left and right, but comes with the burden of finally having to replace. Fringers offers a lot that an entertaining co-op game needs. With different gameplay modes, the game stays enjoyable for a longer time.

However, there is one thing it does not offer, and that is the common depth. Even the cover looks pretty messy and at this point the Fringers are doing what they promise. It’s messy, fast, and requires cooperation. However, this slightly loses the effect of teamwork and mutual progress. During the round you hardly have time to really get involved in the game, time is of the essence, your neighbor is constantly giving you new rings, you want to give away the rings yourself and at the same time there is a destination card that gives you at least one direction for all the confusion it gives. Then someone flips the hourglass, you only have the length of the hourglass and suddenly… you win.

See also  Review the book "Seven Stories on the Energy Transition?" The spectrum of science

The feeling that it was clever tactics or technique that led to victory always remains somewhat neglected. Oddly enough, it doesn’t affect the game, you can even assume the Fringers don’t want it at all, it’s fun here and now, in the chaos. The longer you play, the more experience you have in how to affect the chaos a little. And even if not, you will still be entertained if you achieve your goal. 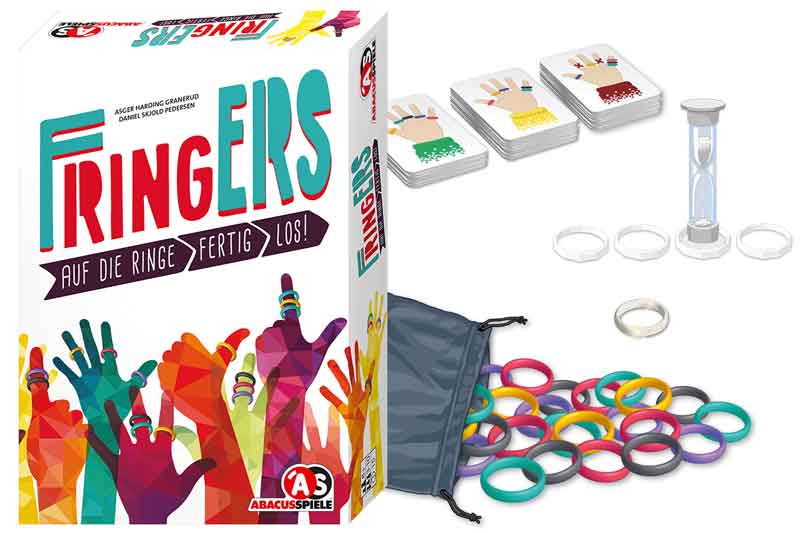 Tried to report the possibility of a replay. I find that several target cards and variations are sufficient and sufficient for longer playing periods. However, after a while, Fringer exhausted himself. It’s not a game all evening, it’s very chaotic, loud and repetitive so in my taste. Because in the end it’s always about the rings and the fingers and their arrangement. But here too, I think Fringers knows what they are at the end of the day, it’s a great game that combines speed and exchange.

Fringers is one of those games that can be explained in a few minutes and can hook even those who don’t like table games for a few rounds. For frequent players, Fringers can be an entertaining challenge, and for creative minds it is definitely a game with x possibilities. In general, the title offers something for almost every player and impresses as a team game with a short life, simple rules and a certain set. The tactical depth, the feeling of truly giving up, and the ability to enjoy the game are negligible.