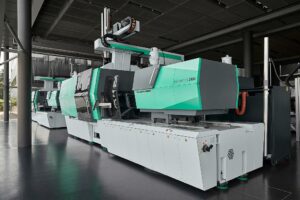 Injection molding of decorative plastic chips creates high-quality surfaces, such as those used There is a growing demand for control panels in the automotive and home appliance industries. As In-Mould-Decoration (IMD)’s first joint offering, Arburg, Loßburg and Leonhard Kurz, Fürth, realized back-injection molding of the washer cap. An Allrounder 820 A from Arburg and a chip feeder with switch cabinet is used from Leonhard Kurz.

IMD technology has great potential for optical improvement and activation of plastic surfaces. With this, endless designs and color embellishments are not only transferred to the molded part. In addition, film back molding saves time and costly post-processing. Design variants and changes can be implemented sooner. 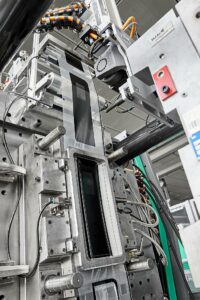 When the panel is formed from the back, an endless film of the film feeder is pulled through the tool and held in place by the mounting frame. (Photo: Arburg)

The Electric Allrounder 820 A with a clamping force of 4,000 kN produces clear MABS washer plates in a cycle time of approximately 60 seconds. The first-cavity die and film feeder, consisting of component dispenser, winder, and control cabinet, comes from Leonhard Kurz. IMD is a continuous roll-to-roll transfer process: the decorative carrier film is rolled over the mounting unit via a film feed, in the example mentioned, the dust is removed with an oilcloth and then pulled through the tool equipped with a frame attachment. When back molding with plastic, only thin layers of paint are transferred. This makes the component easily recyclable at the end of its life cycle. After winding, the carrier material can also be recycled into PET pellets.

A simple exchange of signals between the injection molding machine and the film feeder is sufficient for accurate timing. Before each other cycle, the mounting frame on the side of the movable ejector is also raised. The exact position of the carrier film with registration marks on its edges is determined in the instrument using optical sensors. Then the mounting frame with the sealing flange moves to the starting position, while the film is fixed in the cavity with a vacuum and injected again with mAbs. During the injection molding process, the combination of pressure and temperature causes the decorative element – in this case, high-gloss black lacquer – to separate from the carrier roll and is transferred tightly to the plate’s plastic surface. 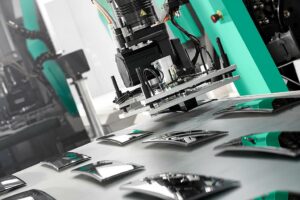 The Multilift V 40 linear robotic system takes care of the gentle handling of the washer panels that are decked out (Photo: Arburg)

The final part, weighing 145 grams, is ejected via a hydraulic core puller on the side of the nozzle. The Multilift V 40 Linear Automated System with Vacuum Cups takes care of gentle transport and placement on a conveyor belt. The final part can be varnished, if necessary, to. They are routed directly onto the conveyor belt through UV curing and unloaded ready for assembly. The following process steps are not required.

Functional products of high quality are in demand more and more. The range ranges from trim strips, panels and center consoles in automotive interiors to control panels for household appliances to laptop covers, mobile phone cases and cosmetic covers. In addition to pure surface decoration, as shown in the example of the opaque design in front of the washing machine lid, tactile and functional surfaces are also possible. With additional integration of touch sensors, the z. Implementation of interactive screens and touch control panels.

See also  UFO report: US intelligence does not want to rule out extraterrestrial technology

More convenient, lighter and safer – SSI is the technology of the future