New World is an Amazon game that has been making news from the start due to the overheating effect of some graphics cards, such as Nvidia’s GeForce RTX 3090 models. The game’s debut on Steam was a real hit, with 700,000 players at once, creating queues for up to Up to 10 thousand people are waiting on the servers.

However, the popularity of the New World seems to have been “cruel”. According to the latest data, the Amazon game has lost more than 70% of players since its launch on Steam.

The Amazon MMORPG was released on September 28 and quickly became one of the most played games on Steam. However, the title's popularity is in sharp decline, and according to Latest informationNew World has already lost more than 70% of its players since its launch on Steam. According to the details, the game lost about 150 thousand players per week.

As evidenced by the data from Steam . ChartsNew World's biggest popularity peak was reached a month ago, on the 2nd of October, with 913,027 active users simultaneously. In contrast, on November 2, this value was about 300,000 players. 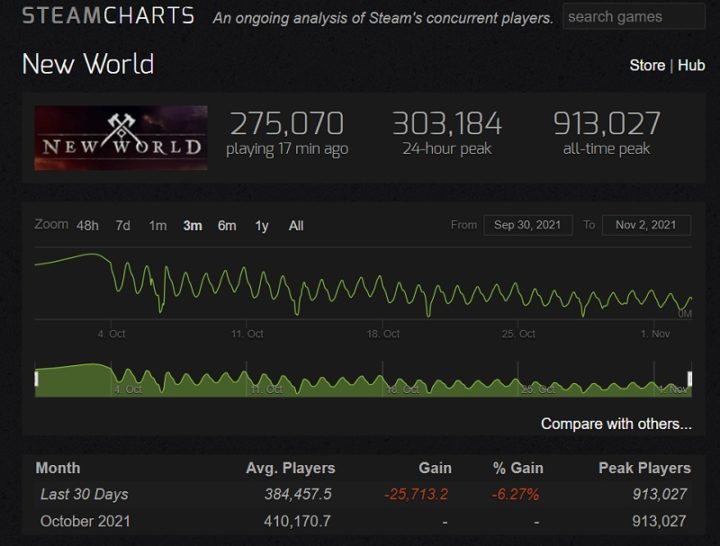 But this decline did not happen overnight. And over the past month, the decline in the number of Amazon title players has been steady. Many players have stopped playing New World due to various issues such as bugs, shallow story, lack of activities, and many repetitive actions, among others.

At the moment, Amazon hasn't announced much about the game. It remains for us to wait for any updates that revive the players' interest. Otherwise, the new world may end up in oblivion.